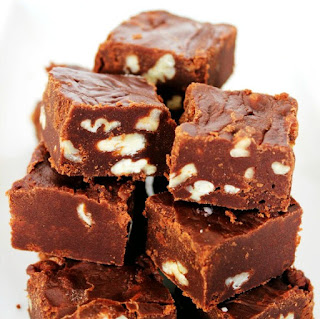 In honor of National Fudge Day, I'm posting a Recipe Round-Up of Fudge Recipes that have appeared on DyingforChocolate.com!

Just an FYI: I'm from Philly, and I grew up with Philadelphia Cream Cheese, so the Philly Fudge recipe below is an adaptation of the famous uncooked fudge recipe developed by Philadelphia Brand Cream Cheese.  It became popular right after World War II. It really is foolproof.

Be sure to scroll down for all the links to fabulous Fudge!!!

One of the first documented examples of American fudge (containing chocolate!) was found in a letter written by Emelyn Batersby Hartridge, a Vassar College student, who wrote that a friend's cousin made fudge in Baltimore in 1886 and sold it for 40 cents a pound. Hartridge asked for the fudge recipe, and in 1888 made 30 pounds of the fudge for the Vassar Senior Auction.

Other fudge recipes in the USA can be traced back to the late nineteenth and early twentieth centuries. Mackinac Island fudge ice cream (vanilla ice cream blended with small chunks of fudge) is still sold on Mackinac Island in Michigan, and surrounding areas, where shops have been selling fudge to summer vacationers since the late nineteenth century.

In The Candy Book (Alice Bradley, 1929) an entire chapter is devoted to fudge.

Posted by Janet Rudolph at 8:37 AM