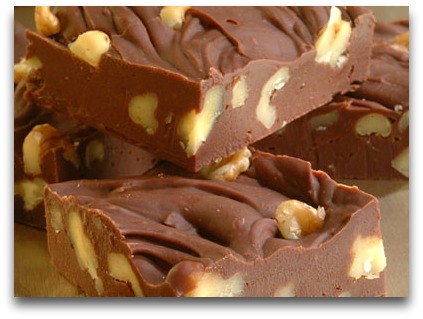 Another holiday, another recipe or two. Today is National Nutty Fudge Day. My Aunt Ann made the best fudge in the world, but now that I know more about candy nomenclature, I think she actually made truffles. They were dark chocolate balls rolled in cocoa. I'll always remember her truffles as fudge.

However, I had my first taste of the 'real' fudge down the shore in Atlantic City. Fudge was sold along with Salt Water Taffy at many of the Boardwalk candy shops. Yum!

History of Fudge: Fudge was supposedly invented in the U.S.in the late 1880s. Historians believe the first batch of fudge resulted from a bungled batch of caramels, as in "Oh, Fudge" I don't think so...

According to Wikipedia, the main component of Fudge was similar to the traditional recipe for Scots Tablet found in The Household Book of the Lady Grisell Baillie (1692-1733). The term 'fudge' is often used in the UK for a soft variant of the tablet recipe.

While you ultimately want crystals to form, it's important that they don't form too early. Now it gets tricky! The key to successful, nongrainy fudge is in the cooling, not the cooking. If you disturb the cooling fudge during this cooling phase you increase the potential for larger crystals (seed crystals) of sugar to form too early and thus a grainy fudge results.

O.K. this is too much for me to take in, not being a candy maker. So how to make fudge relatively easy? Here are three recipes.

1. Easy Million Dollar Fudge
Adapted from Stephanie in All Recipes

Directions
In heavy saucepan over low heat, melt chocolate chips with sweetened condensed milk and salt. Remove from heat; stir in walnuts and vanilla.
Spread evenly into aluminum foil lined 8 or 9 inch square pan.
Chill 2 hours or until firm.
Turn fudge onto cutting board; peel off foil and cut into squares.

3. Nutty Chocolate Fudge
Alton Brown had a great show on the Food Network on making fudge, so I thought I should include one of his recipes for nutty chocolate fudge (slightly adapted)

Directions
Grease 8 by 8-inch pan with butter.
In heavy-bottomed saucepan, combine sugar, chocolate, 1 1/2 Tbsp  butter, half-and-half, and corn syrup. Over medium heat, stir with a wooden spoon until sugar is dissolved and chocolate is melted.
Increase heat and bring to a boil. Reduce heat to medium-low, cover, and boil for 3 minutes.
Remove cover and attach acandy thermometer to pot. Cook until thermometer reads 234 degrees F.
Remove from heat and add remaining butter. Do not stir.
Let mixture cool for 10 minutes or until it drops to 130 degrees F.
Add vanilla and nuts and mix until well-blended and shiny texture becomes matte.
Pour into prepared pan.
Let sit in cool dry area until firm.
Cut into 1-inch pieces.

And, there are websites that are just devoted to fudge. Fudge-Recipes.net and Fudge-Recipes.com and Fudge Recipe Collection. In addition there are many, many other nutty chocolate fudge recipes on various food blogs, including this one!

Have a wonderful Nutty Fudge Day!

Posted by Janet Rudolph at 4:18 PM

Thank you for these, Janet. I've wanted to try making fudge -- not the marshmallow one -- but have always been intimidated. These look like they might be … possible.

Hollygee, here's another fab and easy fudge recipe..made it for holiday presents this year http://dyingforchocolate.blogspot.com/2013/12/fanny-farmer-fudge-guest-post-by.html