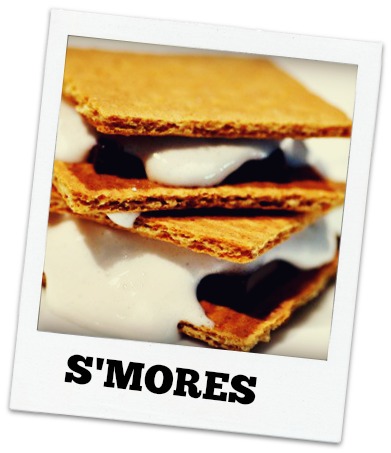 Memorial Day weekend--start of summer. I can now wear white shoes! O.K. that goes back to another era, and I recently read an article that said all the rules have changed. Winter white and grilling all year round! Memorial Day weekend is all about grilling and campfires, and what is more memorable than S'mores!

If you're not familiar with S'mores, they're made by sandwiching a toasted marshmallow and a piece of chocolate between two graham crackers.

The name S'mores (alternatively Smores) comes from the two words "some more," because everyone always want s'more. This American treat was developed by the Girl Scouts in the early part of the 20th century, making use of the newly mass-produced marshmallow. Marshmallows were easy to transport, as were candy bars and graham crackers, and the marshmallows could be toasted over a fire to make a fabulous campfire treat in a situation where other types of sweets would have been difficult to come by. Of course, the quality of the chocolate and marshmallow, and even the graham crackers (if you make your own) will vary.  S'mores aren't about haute cuisine, at least not at my house, and, if truth be told, I love S'mores made with Hershey bars, regalar graham crackers and marshmallows out of the bag!

I have a Round-Up of S'mores Recipes at the end of this post, but here's a very fun recipe. Maybe you've already tried this on your own. Let's face it, S'mores are pretty versatile!

Wacky Candy Bar S'mores
In this wacky recipe, you get to add whatever 'extra' candy or candybar you like for a gooey delicious barbecue or campfire treat. Everyone can have something different. The aluminum foil 'pocket' keeps the goey-ness inside and not on your grill. Lick the foil at the end.

And here's a round-up of S'mores Recipes:

Posted by Janet Rudolph at 9:01 AM