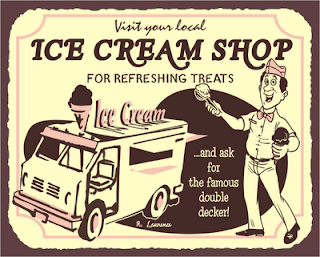 I scream, you scream, we all scream for ice cream!

Cake or Pie, you won't go wrong if you use chocolate ice cream! I adapted the following recipe by using Ben & Jerry's Brownie Batter & Chocolate Fudge Brownie, mainly because you can't have enough chocolate. Another possibility is to make your own Chocolate Pound Cake. Here's a link to a favorite chocolate poundcake recipe. Marble pound cake works, too!

Directions:
1. In a small saucepan, bring the heavy cream to a boil over medium-high heat. Put the broken chocolate pieces in a heatproof medium bowl and pour the boiling cream over the chocolate. Let sit until chocolate is melted, about 2 minutes. Stir the mixture with a fork for about 2 minutes, until the ganache is smooth.
2. Line a nonstick 9 x 5 x 3¾-inch loaf pan with 2 overlapping sheets of plastic wrap, allowing a 4-inch overhang on all sides.
3. Pour half of the ganache (1 cup) evenly into the lined pan and spread to cover the base. Cover the ganache with a single layer of tightly packed cake slices; be sure the layer is flat and even. Working quickly, spread the first chocolate ice cream evenly over the pound cake. Cover the ice cream with a layer made of half of the chocolate wafers. Spread the remaining ganache evenly over the wafers, then top the ganache with another layer, using all of the remaining wafers, and place the cake in the freezer for about 30 minutes to chill and firm up.
4. Remove the cake from the freezer and spread the second chocolate ice cream over the wafers. Top with another flat, single layer of tightly packed slices of pound cake, trimming 1 or 2 slices to fill in the gaps (there might be a few slices left over). The cake may be slightly higher than the pan. Cover the cake completely with the plastic overhang and freeze until firm, at least 5 hours or overnight.
5. To loosen the ice cream cake from the pan, open the plastic wrap and invert the pan over a flat serving platter. Remove the plastic wrap. Scatter the crushed chocolate wafers over the ice cream cake, then slice and serve immediately.
Posted by Janet Rudolph at 10:00 AM

My birthday is in January but I know for sure what my birthday cake will be!

In the end 'Death by Chocolate' :)