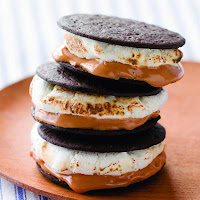 Since it's Fourth of July weekend, I know I'll be making S'mores. What's truly amazing are the infinite varieties of S'mores out there.

On Memorial Day I did a Recipe Wrap-up with Traditional S'mores, Cupcakes, Brownies, Wacky Candy Bar, Chocolate Chip, Pie, Ice Cream Sandwich, and more. But I knew I wasn't done.

One of my favorite S'mores recipes is for S'mores Pops! Check out Give Me Some Oven for this S'mores on a Stick variety. Easy and great to make with kids.

I love traditional marshmallows, but Kraft has a new product, new to me, anyway. Jet-Puffed StackerMallows, flat marshmallows. What could be easier for S'mores. They're rectangular shaped marshmallows designed to fit on a graham cracker. Just an FYI: These marshmallows don't ooze as well as the 'regular' ones, so don't expect quite the same gooey texture.

The Idea Room has Special Fourth of July S'mores on a Stick that utilize these flat marshmallows. Traditional S'mores dipped in Chocolate (and on a stick): then sprinkled with red, white & blue jimmies (sprinkles). Can't wait to make these!

And, one more S'mores recipe adapted from Sunset Magazine.


Photo: S'mores Pops: Give Me Some Oven
Photo Peanut Butter S'mores: Leo Gong
Posted by Janet Rudolph at 8:07 AM

Some fabulous videos and links in your last few posts, Janet. I so enjoyed my visit this morning.
I'm copying the peanut butter s'mores recipes now! What a super idea.