My friends Janet & Marty are recipe testers for Cook's Illustrated. It got me thinking about some 'new' sources for 'old' recipes, and Cook's fits the bill. I found this recipe (and photo) on their site. It's from Woman's Day Magazine, September 1949 (another great site for retro recipes).

I've never seen White House Evaporated Milk, but any evaporated milk will do. I do remember the A&P. My mother shopped there. Well, there and at the Acme. Remembering all those shopping trips as a child, I must mention that my mother did most of her shopping at Reliables. It was a small Mom & Pop corner grocery store where she would choose her fruits and vegetables, and, occasionally some staples--and they delivered them later the same day. She would then go to the butcher for meat, the chicken store for chicken, the fish store for fish, and the bakery for bread--fresh every day! Kind of the way I shop, today! I think of it as so European, but it's really just full circle back to my mother's generation.

Eggs were delivered twice weekly by the eggman who raised chickens on his farm in New Jersey. As far as milk, well, of course, it was left at the backdoor every morning. Maybe I don't really remember this, maybe I just heard about it from my grandmother who lived with us, but I have images of the milkman coming up the back alley in his horse drawn truck. Probably not, but such a great visual!

Anyway, here's a recipe that can be easily updated for a quick dessert.  Use really good chocolate, Madagascar vanilla, homemade marshmallow or marshmallow creme, whipping cream instead of evaporated milk, and it will be fab. Rotary egg beater? I no longer have one, but I do have a whisk--and, of course, a KitchenAid. Recipe says to freeze with temperature control set at coldest setting! That's pretty funny, too! Anyway, as far as recreating this recipe, in a pinch, use what you have or follow the directions! Easy and quick. A little research on my part turned up several Marlow recipes including strawberries. Must have been a popular dessert in the 40s & 50s. Unfortunately, this will not be 8 cents a serving any more. 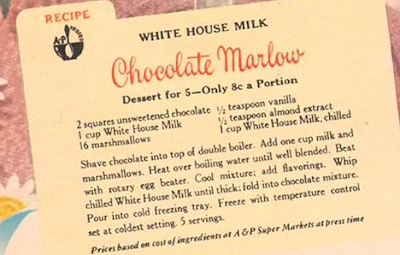 Posted by Janet Rudolph at 1:09 PM

I love old recipes and I collect old recipe books. They are so much fun and a look back into another era. Thanks for posting this! Cheers~