It's been awhile since I did a Chocolate Bytes post. So here's some news!

Using new digital technology this printer allows you to create your own designs on a computer and reproduce them physically in three dimensional form in chocolate.

"What makes this technology special is that users will be able to design and make their own products. In the long term it could be developed to help consumers custom- design many products from different materials but we’ve started with chocolate as it is readily available, low cost and non-hazardous. There is also no wastage as any unused or spoiled material can be eaten of course! From reproducing the shape of a child’s favourite toy to a friend’s face, the possibilities are endless and only limited by our creativity".

The printer works like any other additive 3-D printer, building up the design one layer at a time, only this one works with delicious chocolate which can be eaten afterwards. The final goal is to have the printer available to consumers, so they could go into a store with their design and print out a tasty treat to give as a gift. To this end, an easy-to-use interface to input designs is already in development.

2. Chocolate Bar Flashdrive
Here's something fun and sweet to carry around in your purse or pocket! 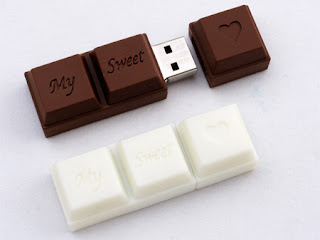 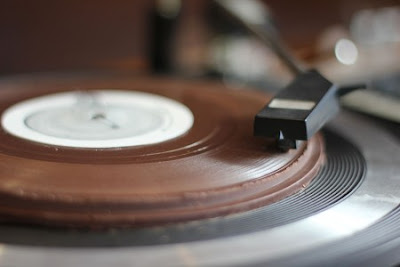 This record can go from turntable to coffee table to your mouth! Scottish band Found, looking for an inventive new way to release a new single, baked up a chocolate-y idea: to press the 7” record on chocolate.

The band enlisted the help of a friend, baker Ben Milne who, after several failed attempts, managed to successfully created the Willy Wonka-like treat; the entire record, including the paper label, is edible.

While not audiophile quality, the chocolate disc plays a decent version of the band’s “Anti-Climb Paint” single.
Posted by Janet Rudolph at 10:35 AM

Hey, I have seen the record and the 3D printer earlier. But the flashdrive was a kickass invention. Thanks for sharing :)

Btw, I have posted the 3D printer in my blog too..

The longest person who lived, 122 years old ate a kilo of chocolate a week! mmm yummy