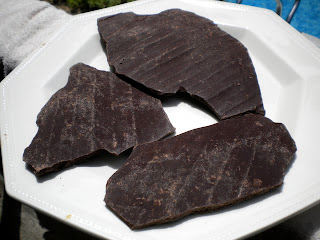 Ken Wishnia is the author of the Macavity Award nominee, The Fifth Servant, and the Edgar Award-nominated series featuring his Ecuadorian-American sleuth, Filomena Buscarsela. 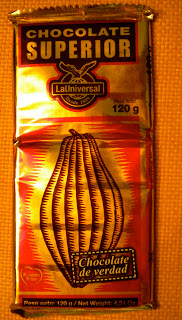 That’s what is says on the label, anyway. The packet of powdered cocoa I bought the last time I was in Ecuador said Cacao en polvo, which can be translated as “chocolate powder.” Only they left out the “d” and it became “chocolate power.” How could I resist?

As some of you know, my wife Mercy is from Ecuador, and we lived there for several years (and I based my first series on these experiences). The country’s major exports include bananas, shrimp, “Panama hats” (which are actually made in Ecuador), long stemmed roses, and the fa-a-abulous liquor of the cacao bean. Volcanic soil and a year-round growing season help produce these marvels, and locally made chocolate bars feature the cacao bean pod on the label.

Now, you can get “chocolate power” and chocolate bars in any grocery store or supermarket, but you have to go to the open market to get the chunks of pure, unsweetened chocolate that still retain the shape of the ribbed palm leaves they were poured into on the plantation.

It also comes in “mud pie” form and “chunky style”.

In fact, the hot chocolate made from this stuff is so powerful I drink it instead of coffee. 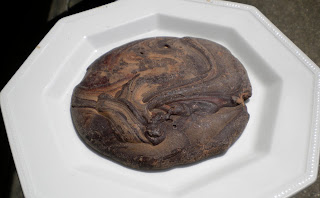 It’s the neutron star of chocolate.

In U.S. culture, chocolate is often associated with a taste for cozies, but this stuff will get you ready for The Big Knockover.

My favorite chocolate recipe is as follows:

Open a bar of high-quality dark chocolate. Break off a piece. Put it in your mouth and allow it to melt. Don’t chew.

Heat milk in saucepan. Add solid dark chocolate to taste and use a whisk to distribute it as it melts. Add sugar to taste. Overthrow government. Sit back and enjoy.
Posted by Janet Rudolph at 8:04 AM

Ken, if you ever get bored with mystery writing, you should write a witty cookbook--and include the Hot Chocolate recipe. It brought a much-needed smile to my face.

Loved this! Ken, I was thinking that chocolate makes everyone feel better. Wouldn't you overthrow a government when you're cranky? I'll look for your books.