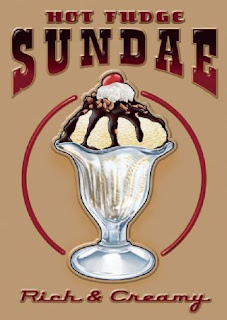 Today is National Hot Fudge Sundae Day, and given that most of the U.S. is scorching, it's the perfect treat!

There are many variations about the origins of the Hot Fudge Sundae. According to Wikipedia, a frequent theme is that the dish arose in contravention to so-called blue laws against Sunday consumption of either ice cream or ice cream soda (the latter invented by Robert M. Green in Philadelphia, Pennsylvania, in 1874). The religious laws are said to have led druggists to produce a substitute for these popular treats for consumption on Sunday. According to this theory of the name's origin, the spelling was changed to sundae to avoid offending religious conventions. Since I grew up in Philadelphia, I remember the Blue Laws, although at that time they pertained to alcohol and not ice cream.

You don't really need a recipe for a hot fudge sundae. I gave the ingredients above. However, like anything else, it's all about the quality of the ingredients. Hot Fudge Sundae Cake is a great variation on this traditional treat, and it can be made in a pan in the oven or in a Slow Cooker. See recipe HERE. 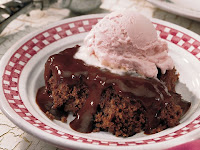 Posted by Janet Rudolph at 7:55 AM

That cake looks so moist and rich! And I love the historical bits you included in the post especially because our company is in Chicago, IL, a stone throw away from Evanston.

Awesome post. Thanks, this is one of my favorite cakes as a child.

Hot Fudge Sundae. The icon of that dessert that represents my youthful food indulgence. My understanding of the word Sundae is that it comes from Sunday and the myth or story surrounding the spelling was that it was a way to avoid "blue Laws" against this kind of decadent consumption on Sunday. Of course it requires the red dye # whatever cherry on top to be fully complete.

Everyday should be Sundae!