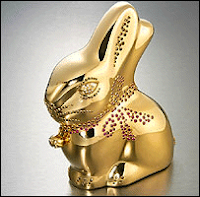 I saw a hare today, and it got me remembering that I didn't report on the Chocolate Bunny Wars (Great title for a mystery!). In June the European Court of Justice handed back to Austria a long-running dispute between Swiss chocolate maker Lindt and Sprungli, maker of gold-wrapped Easter bunnies since the 1950s, and Austrian chocolate company Hauswirth.

Lindt trademarked its design-a Golden Easter bunny with a red ribbon around its neck (see the exclusive Harrod's bunny on the left) in 2000, and in 2004 took action action against Hauswirth claiming that its rival rabbit (lower right) was an infringement. Hauswirth also makes golden bunnies with red ribbons around their necks, and they questioned whether the Lindt trademark is valid since chocolate bunnies have been on the market for decades. Lindt insists the Hauswirth bunny must change its colors. They suggested bronze wrapping instead of go 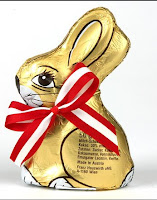 ld and a green ribbon instead of red.

The ECJ said in June that the matter hinges on whether a company knew others were producing similar products at the time it applied for a trademark. It is now for the Austrian courts to decide if Lindt's trademark was obtained in bad faith.

Personally I think the Lindt rabbit is better looking! Anyone want to comment on the chocolate?
Posted by Janet Rudolph at 6:00 AM

I've tasted a lot of chocolate in the last two years, and my very favorite is Lindt's 70% dark chocolate. I don't beleive I've yet tried any Hauswirth. But these two bunnies do look alike!