In the UK it will be sold at Harrods and in the US at Chocolate Covered, one of my favorite chocolate stores. It will also be available online. The first markets will be Saudi Arabia, followed by Bahrain, Qatar, and Kuwait. Al Nassma is also looking at the Japanese market. 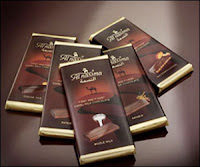 Camels' milk is seen to be healthier than cows' milk since it contains 5x more vitamin C, less fat, less lactose and more insulin. Doesn't that open up a lot of possibilities.

One hundred tons of chocolate will be produced a year in partnership with Austrian chocolate maker Manner. Al Nassma manufactures the end product in Dubai. All chocolates are produced without preservatives or chemical additives with a range of locally popular spices, nuts and honey.

3000 camels in Dubai produce the milk, but how many can go through the eye of a needle?
Posted by Janet Rudolph at 6:15 AM