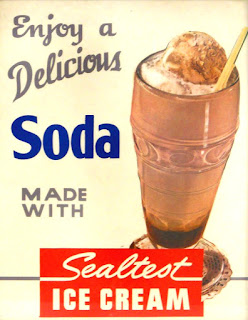 Today is National Ice Cream Soda Day, and, of course, I'm going to have a Brown Cow! See recipe below. Ice cream sodas, aka ice cream floats, are made by combining ice cream with soda or carbonated water and flavored syrup. Of course, mine always contain chocolate (ice cream and syrup). Many people consider root beer and vanilla ice cream to be the classic ingredients for an ice cream soda, but that's a Black Cow. I posted a recipe on National Black Cow Day. A Brown Cow is very similar, but it's made with chocolate ice cream. See below for an easy recipe for a Brown Cow to celebrate National Ice Cream Soda Day!  Serve in a "retro" glass or Mason jar for that 'out of the past' feeling. A Brown Cow is great for Fourth of July or any time!

According to Wisegeek.com, "although the recipe for an ice cream soda is quite simple, there is a trick to creating the perfect drink. Plain soda foams because it releases carbon dioxide gas, but ice cream is actually a foamy mixture of liquid, ice crystals, and air pockets. Therefore, if you want to make an ice cream soda with a lot of foam, put the ice cream in the glass before pouring the soda. If you want to make a treat with a minimal amount of foam, add the ice cream after the soda has been poured."

According to food historians, the first ice cream soda was created by accident at the Philadelphia Exposition in October 1874. It was there that pharmacist Robert M. Green invented the now-familiar ice cream soda. At that time, at soda fountains in pharmacies across America, the pharmacist or an employee known as a soda jerk (because he had to jerk back the tap of carbonated water to make a soda) would create a “cream soda” by adding a tablespoon of vanilla or other flavor of fountain syrup along with a tablespoonful of heavy cream to soda water.

As with most stories, there are multiple variations. One version says that the fountain ran out of fresh cream. As there was no cream in the vicinity, Mr. Green got vanilla ice cream from a nearby vendor. He planned to let it melt and use it as cream, but was so busy that instead he added a frozen spoonful directly to the cream soda. In another version, he ran out of ice and used the ice cream to cool the drink. However, in his own published account, (in Soda Fountain magazine in 1910), he recounted that while operating a soda fountain at the Franklin Institute’s sesquicentennial celebration in Philadelphia in 1874, he wanted to create something that would attract customers away from another competitor. During some deliberate experimenting, he added ice cream to the soda water.

Whatever the genesis, the ice cream soda was an instant hit and spread nationwide, where they were also called floats (for the scoop of ice cream floating at the top of the glass).
Read more at: http://www.thenibble.com/reviews/main/ice-cream/ice-cream-float.asp