In my other life, well, in one of my many other lives, I host Literary Salons in my home. Last week I was lucky enough to host Scottish author Catriona McPherson. I say lucky not only because she's witty and funny and creative and an excellent writer, but because she brought her own cake! "If I knew you were coming, I'd Have Baked a Cake!" This was a first. I don't think any other author has ever shown up with cake, let alone a cake they made! So, of course, I had to have the recipe. That in itself was unique. Catriona not only didn't have a written recipe, but her manner of testing the cake was by listening to it. No toothpicks involved. And, then there was the matter of the word cake. It certainly involved the English language separated by a large body of water. I just had to ask for a post on DyingforChocolate.com. Thanks, Catriona, for stopping by! 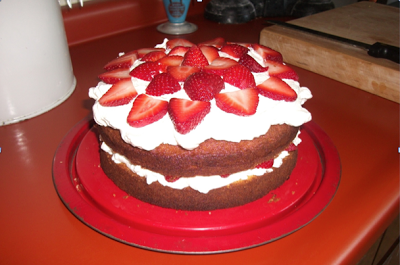 That’s the first thing we need to sort out. I’m often cast adrift from those around me by our shared language, and it took a bit of to-ing and fro-ing on Facebook to establish that this wasn’t a shortcake, or a sponge cake, or a sheet cake, or an angel food cake, or (although it’s close) a white cake.

I don’t really know what those categories of American sweet treats are. I know this stuff as “cake”. Like there’s camembert, stilton and chevre, but there’s also . . . “cheese”. Focaccia, ciabatta, baguettes and . . . “bread”.

So here’s my mother’s “cake” recipe.

I know standard US recipes use volume rather than weight. I use these: 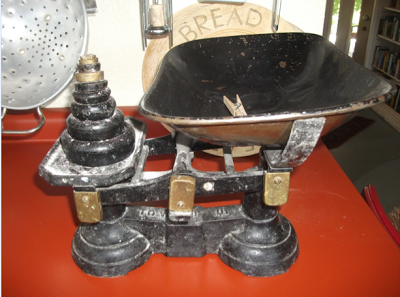 Someone once asked me if they still worked. I thought: how could they not?

You’ll also need an 8in diameter cake tin. I use one with a push-out bottom and line that bottom with a disc of greaseproof paper. And I use a hand-held electric balloon whisk. If you are gym-fit, you could use a wooden spoon.

If you like vanilla – I love it! – you can add a teensy-weensy drip of vanilla extract too. And if you want to make a chocolate cake, Janet, you can take out an ounce of flour and add an ounce of cocoa powder in its place.

Set your oven to 300-325ish. Sorry, but you need to get to know whether your own oven is sluggish or fierce. Mine is a bit fierce so I tend to the 300 end.

It’s very important that the butter and eggs should be at room temperature. If they’re cold the first bit of this is well-nigh impossible.

Okay, in a large bowl, cream the butter and sugar together, by whipping them with your brawny arms or with the electric whisk set on nuclear. Keep going until the mixture is pale and fluffy and there are no gritty bits.

Then break one egg into the mixture, add a tablespoon of flour to it (this prevents curdling) and beat/whip again. Then the next egg and another spoonful of flour. Then a third of each. If it curdles, soldier on; it’ll come back together in the end. Up to this point the more mixing the better. Scrape the sides to make sure everything is well beaten.

But then, oh but then, it all changes!

When it comes to adding the flour, you want to get it all incorporated while at the same time disturbing the egg mixture as little as possible so as not to pop all the bubbles which are going to make your cake light.

So in about four batches: add some flour and fold and cut, fold and cut. This means sweep a metal spoon around the edge of the mixture and then once through the middle. The flour will gradually be mixed in.

I’ve heard it said that if you have a food processor you can dispense with folding and cutting. But I have this: 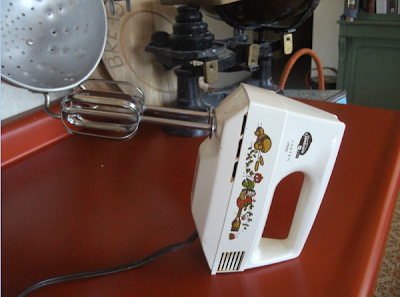 When all the flour is incorporated, gently pour/slide/scrape the mixture into the cake tin. Have it higher round the edge than in the middle so that it ends up flat as it rises.

Put it in the oven and then – very important – leave the door closed. It’ll fall if you peek. It should take about 50 mins to an hour. You can start checking after 40 if you think your oven is on the aggressive side.

Leave it in the tin until you can handle it without wincing – about ten minutes. Then turn it out onto a wire rack. 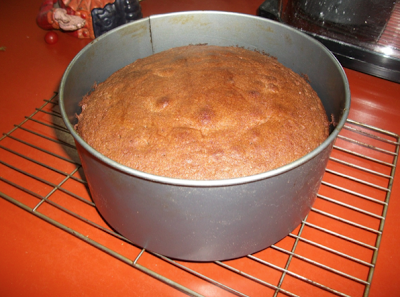 Et voila. For the literary salon at Janet’s house, I cut it in half and filled and topped it with cream, whipped up with some icing/powder sugar and a drip more vanilla and added strawberries. Butter cream icing (one part butter to two parts icing/powdered sugar) and M&Ms are also a fine idea. But don’t, whatever you do, go to all this faff with the warm eggs, and folding, and listening to a cake - and then cover it in that nasty shop-bought gloop.