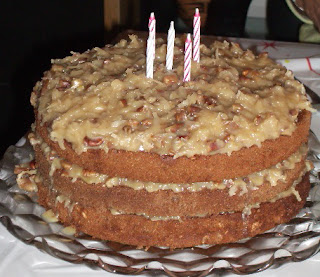 Here's the "Original Recipe." I found this specific recipe in many places on the Internet, and I daresay no one can claim it as their own. So even if you think you're making Grandmom's recipe--and it might be with a few changes over the years- the following is a basic one that millions use. That's not to say I didn't find several unique recipes for German Chocolate Cake that peaked my interest. But those are for another time.

Directions:
Cook milk, eggs, and water over double boiler until thickened.
Cook it over direct heat if you use complete concentration.
Then add vanilla and butter and whisk in until melted and smooth.
Add chopped pecans and coconut.

Assembly:
Divide filling evenly between 3 cakes putting 1st layer down, then spread filling evenly. Repeat with  other layer.
Frost side or top of the cake only. (Maybe--but make more, and you can frost everything)
For garnish,  place pecan halves around top edge.

My friend Iris, who sadly passed away, used to make the best German Chocolate Cake. She said it was an African American traditional cake made and served at New Year's. I can't find any information on that tradition in the African American community, so I think it was only a tradition in her family. Sadly, Iris never shared her recipe. Some people keep family recipes within the family. The photo in this post is Iris's German Chocolate Cake. It was always fabulous!
Posted by Janet Rudolph at 6:55 AM

I have asked other friends, Louise, about the connection, and none of them know about it. I might ask Iris's daughter... she might know.. and she might, I hope, have the recipe!

You keep working on it Janet. I'm sure you'll come up with something!

I love the simplicity and beauty of this