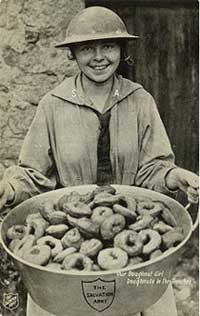 National Doughnut (Donut) Day is the first Friday in June. This year it falls on Friday, June 7. That's an extra wait for many who like to kick off the month with free donuts. Doughnut Day was created by The Salvation Army in 1938 to honor the women who served doughnuts to soldiers during World War I.

Many American doughnut shops offer free doughnuts on National Doughnut Day. In 2009, both independent doughnut shops and large national franchises offered free doughnuts in the United States. National Doughnut Day started as a fund raiser for Chicago's The Salvation Army. Their goal was to help the needy during the Great Depression, and to honor The Salvation Army "Lassies" of World War I, who served doughnuts to soldiers.

Dunkin' Donuts: Buy any beverage and they'll throw in a complimentary doughnut (while supplies last)  Dunkin' is also introducing a new sandwich on June 7: the Glazed Donut Breakfast Sandwich.. Bacon & Fried eggs between a split glazed doughnut that they say is 360 calories. Really??!!

Tim Horton's has a coupon on their Facebook page for a free doughnut with any purchase in U.S. lcoations. Like Tim Horton's and print coupon.

Entenmann's Bakery is donating $1 to the Salvation Army for each person who "likes" the Entemann's Facebook page (up to $30,000). And right now, in celebration of the day, Entenmann's is rewarding lucky winners with 'Free Donuts for a Year' in a sweepstakes on their Facebook Page.

Posted by Janet Rudolph at 2:08 PM