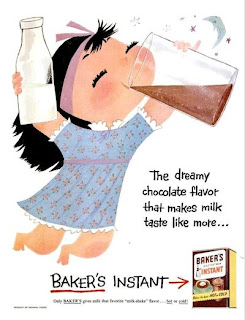 Today is National Chocolate Milk Day. Everyone knows that chocolate milk is a sweetened, cocoa-flavored milk drink that can be purchased pre-mixed or made at home. Lots of ways to make chocolate milk, and lots of different ingredients can be added to give it a special flavor. And, as always, remember it's the quality of the chocolate that will make a big difference--and the milk: 2 %, whole, etc.

For you Adults out there who want a different kick in your chocolate, scroll down for 2 Chocolate Milk Cocktail recipes.

***
Here's an easy chocolate milk recipe. As always, use the very best chocolate. Basically you make a chocolate syrup first, then add the milk.

Want something a little more unusual? Sunset (1994) had a wonderful Ultimate Chocolate Milk Recipe (Nicaraguan Chocolate Milk). This is not a classic, but it might soon be for you. Preparation takes some time, so you won't be drinking this today.

Two years ago, I paid homage to one of my favorite TV sitcoms, Modern Family. I'm so glad they were honored again this year at the Emmys. In the premier episode two years ago, Manny is studying with a girl he has a crush on. She comes to his house where Manny's doting Columbian Mama Gloria (Sofia Vergara) makes the kids chocolate milk. The young girl with whom Manny is smitten says that they always add salt to chocolate milk at her home. Gloria, threatened by another 'woman' in Manny's life,  says she doesn't like it that way.  Of course, when she tries it without the two in the room, she really loves it.

Put the milk in the bottom, pour the liqueur on top and add dash of amaretto. Do not mix.
Serve in a tumbler.

Posted by Janet Rudolph at 7:55 AM

Three cheers for chocolate! And the milk that turns it into a healthy drink. ;) It's refreshing to see another writer with varied food and suspense-related hats.

Thanks for the cocktail recipes!