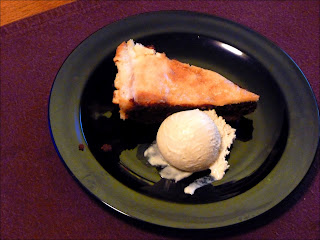 I so enjoy when my loves of literature and chocolate collide. Today I welcome author Yves Fey with a guest post for Lemon Cheesecake Brownies. Thanks, Yves, and feel free to post again!

FLOATS THE DARK SHADOW is Yves Fey's first historical mystery, set in the dynamic and decadent world of Belle Époque Paris.  Yves Fey has an MFA in Creative Writing from Eugene Oregon, and a BA in Pictorial Arts from UCLA. She has read, written, and created art from childhood. A chocolate connoisseur, she's won prizes for her desserts. Her current fascination is creating perfumes. She's traveled to many countries in Europe and lived for two years in Indonesia. She currently lives in the San Francisco area with her husband and three cats. Writing as Gayle Feyrer and Taylor Chase, she previously published unusually dark and mysterious historical romances.

These came about because I liked the idea of baking a topping right on the brownie and tried various flavors, a peppermint topped brownie, and a peanut butter topped one.  I particularly liked this very sophisticated brownie, with its tart lemon top and moist, bittersweet chocolate bottom.  If you want to get very fancy, you could top the cheesecake with a chocolate layer, or serve it with a raspberry sauce. In the photos, my friend Kim Beeman provided the yellow plum and Meyer lemon ice cream to counterpoint the brownies.

Preheat the oven to 350 degrees. Butter a 8” or 9” square baking pan, and line it with buttered foil.
In a double boiler, over hot not simmering water, melt together the two chocolates. Remove from the heat, stir to blend, and allow to cool somewhat.
Cream together the butter and the sugar. Beat in the eggs, one at a time. Add the flavorings. Combine the mixture thoroughly with the melted, cooled chocolate. Spread the brownie base into the prepared pan. Set aside.
Beat the cream cheese and butter until fluffy. Whip in the sugar. Beat in the cream and then the lemon juice and grated lemon rind. Pour the cream cheese mixture over the brownie base.
Bake in the preheated oven for 45 minutes, or until the cheesecake is barely set. Allow the brownies to cool completely. Chill if desired. Cut into squares or rectangles and serve.

I made these in a pie pan for this blog, thinking the wedge would be prettier than the square. They were tasty as always, but I think a square or round pan is better, so the cheesecake top doesn’t spread out so much. I was also lazy and didn’t do a pan liner. After I refrigerated them, they glued themselves to the pan. Perfectly yummy, but they had to be pried out. Be warned.
Posted by Janet Rudolph at 1:42 PM