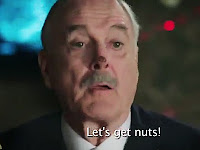 A set of commercials were filmed in August at Cleese’s home in Monaco, under the direction of the Inbar, Merhav, Shaked Advertising agency.

Cleese was recently cast in Reshef Levy’s new movie “Hunting Elephants.” He had to turn the part down, however, due to medical reasons. Patrick Stewart will play the role.

Hashahar Ha’oleh was not prepared to give up on Cleese and because he could not fly to Israel, they flew to his home in Monaco. The entire production staff was flown out from Israel to make the commercials, with Cleese apparently receiving $50,000 for his participation.

This ad shows John Cleese as a Western General who gives the IDF the go ahead to perform and air strike against an anonymous Middle East enemy. Odd for a commercial for a Nutella type chocolate spread.

"We need your approval of the attack," an Israeli in the war room says. "I promise you, we will be in and out in 33 minutes...we have the right to defend ourselves!"

A distracted Cleese then grabs a jar of HaSachar Haole's Sababa Egozim spread, messily licks the wrapper, and then announces a Hebrew phrase that the Jerusalem Post translates as "Great stuff" but what appears to be the company's official YouTube account translates as "Let's get nuts!" Generals high five; Cleese doesn't notice the residual chocolate smudge on his nose.

Hmmm...I think the Nutella spread has seen it's day! Jiffy is also making it's own version of chocolate hazelnut spread, and frankly, I can't tell the difference! AND it's less expensive. :)

I honestly do not see the point. Maybe it was more about the trip to Monaco? I mean, that's the only reason I would sign up for such a stupid project.

John Cleese also does another commercial here in the States that was recently released. He's very funny!

Hello...I am commenting on an old post because I cannot find your email (which may be a hint) and I would like to ask you if you would like to exchange blog posts with me. I wrote a mystery called "The Chocolatier's Wife" -- two things you like combined, and it seems to me that it would be fun to have a post about it on your site? Would you be interested?

Forgive me if this is a bit rude. I am enjoying your blog, and just thought it would be nifty.