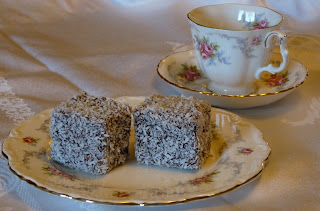 A little while ago, I heard about Lamingtons for the first time from my friend Bobbi Mumm. Now, I read a lot of Australian books, but I didn't remember Lamingtons being mentioned. Maybe I wasn't paying attention. That being said, since Bobbi's mention on Facebook, I've now seen Lamington recipes and comments all over the Internet in both the Foodie Community (Pink Lamingtons for Breast Cancer Awareness) and Mystery (Kerry Greenwood) Community. Very odd, but it's usually that way. So once again my worlds collide. Today I welcome back Bobbi Mumm. Be sure and comment on your Lamingtons experiences.

Bobbi Mumm is a mystery and thriller writer in Saskatoon, Canada where she works half-time as an event planner at the University of Saskatchewan. Married to a nuclear physicist, she has four children.
A year ago, Bobbi completed her first novel, Cream with Your Coffin and is seeking a publishing home for the novel. Cream with Your Coffin was a quarter-finalist in the 2011 Amazon Breakthrough Novel Award. Almost finished her second novel, thriller De Rigueur Mortis, Bobbi spends much of her day immersed in 1954 Paris.

Lamingtons, an Australian childhood favourite, are a delicious combination of chocolate, coconut and cake.

Why is a Canadian writing about Australian confections? Australia is about as far away from Canada as you can get. It’s because I’m married to an Aussie. The result of this blissful union is a few children who consider themselves half-Australian. And this year my daughter wanted Lamingtons for her birthday.

In Australia Lamingtons are used as lunchbox treats and, most often, as the feature of school fund-raising bake sales. I can only imagine that they have the status of rice crispy squares in North America. But perhaps something more because there is an Aussie national pride surrounding this sweet treat.

I first tried them - served on lovely china - at a ladies’ tea, hosted by an Australian friend. 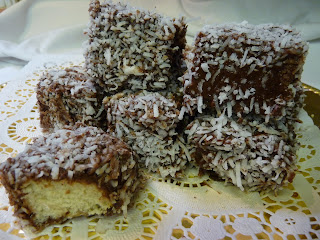 Beat butter, sugar and vanilla in a large bowl with mixer until fluffy.
Beat in eggs.
On low speed, beat in flour in 3 additions alternately with milk in 2 additions. Increase speed and mix for one minute, scraping sides of bowl as needed.
Pour into 13" x 9" cake pan (greased and lined with waxed paper).
Bake at 350 degrees for 40-45 minutes or until toothpick inserted in center comes out clean.
Cool in pan on a wire rack for 10 minutes. Turn out of pan onto rack and cool completely.
Cut into 3” squares. For a ladies’ tea, cut smaller. Freeze squares, on rack, until completely frozen. The freezing step is important and one that I added (because in Canada we adore freezing). Otherwise you end up with a mess of crumbs in your icing.

Icing
4 cups sifted icing sugar
2/3 cup sifted cocoa
½ teaspoon vanilla extract
2/3 cup water (approximate)
Mix icing, adding water slowly, until it is retains a slight thickness but is quite runny. You can adjust as you experiment. The icing should drip off the squares for a few seconds.
4-6 cups unsweetened shredded dried coconut (in a separate bowl)
Place a baking rack on top of a cookie sheet (to catch drips).
Taking no more than four or five squares from the freezer at a time, dip one square into icing mixture, making sure that all sides are coated.
Dip square into coconut, so that all surfaces are covered.
Place on rack to harden.
Repeat until all squares are done. If icing mixture thickens as you work, mix in a teaspoon of water at a time.

Note: Your fingers will get very messy with this process.
Lamingtons, once prepared, can be stored in a sealed container for up to three days. I’ve also frozen them, with no ill effects. Makes 16 Lamingtons.
Posted by Janet Rudolph at 9:36 AM

Chocolate and coconut doesn't get much better. I think these are a step up from rice crispy squares. I think more like a cupcake.

Lamingtons! Huzzah! We need a Lamington craze in the USA. Perhaps it will start here. :)

Janet A, you are right. They are like a cupcake and coconut is a lovely change. When I was a girl (in Canada) coconut was a staple in home baked goods but it's not common any longer.

Cleo, I've never been at the leading edge of any craze (except my own crazed-mother phases). That would be delightful!

Lamingtons! I must taste these soon!

I had not heard of these before either, and then read on Facebook about Bobbi making them for birthday celebrations. I have not tried making them yet, but I will (soon!). Thanks Bobbi and Janet!

Bobbi, these are so beautiful..and how can you go wrong with coconut & chocolate :-) thanks for the guest post!

Brenda, they are delicious. Someday, if we run into each other at a writer's guild event, I might just have one in my pocket! Doesn't that sound tasty? ;-)

Kaye, you'd like them, I think. And I believe they have no calories. Proof: on Thanksgiving my 68 lb daughter ate four of them. She didn't gain an ounce! ;-)

Janet, it's so much fun to guest blog on your site! Thank you. My family thanks you, too, because they got Lamingtons a few extra times as I tried out variations.

My pleasure, and I'm still stunned that someone (even though a girl) could possibly weigh 68 pounds. :-)

Well, well, well :) I was harassing one U of S staffer for Cheesecake, now I can expand my portfolio and start on yet another staffer for "lamingtons". In fact I just said "lamingtons" out loud and I love the sound of the word. :) Bobbi, you know what to do.....

Janet, yes, 68 pounds was a while back for me. That number in kilograms would be closer, these days.

That is a treat I adore! Lovely looking Lamingtons.

University of Saskatchewan Bookstore, ha! You eat a Lamington and you'll have sticky icing and coconut all over your fingers. Not a good thing in the book business. ;-)

Rosa, thank you. And you're in Switzerland! Lamingtons have truly spanned the globe.

As an Aussie visiting Istanbul, I would just about do anything for a lamington right now. Calories or no calories.

I love Lamingtons, did not know their name, always called them coconut squares. When we have made them we have used chocolate syrup in the past. I will have to try the icing next time. Thank you!

Yummy! And using my favorite yellow cake recipe too. I'm always looking for an excuse to use more frosting. :)

Hi Bobbi, nice to "meet" you. I'm not much of a baker but I have heard of Lamingtons before. I do believe there is a day devoted to Lamingtons in July. Maybe the 20th or 21st. I can't remember.

Anyway, they sure sound delicious and since I'm not a baker, Betty and I are old friends:)

Bernie, how wonderful to see Istanbul! My husband's from Melbourne and he suffers great pangs of homesickness from time-to-time. He's been here 25 years and still hasn't taken Canadian citizenship. We tease him about this, mercilessly.

Kim, I love Dove Chocolate! Yes, the icing works well and the method I have since 'perfected' is, using a knife, spread a very thin layer of icing on all sides. Much neater and nicer looking Lamingtons than the dipped method. Perhaps not quite the traditional way but no-one will know but us. ;-)

Liza, you are right. That's a great cake recipe. My Betty Crocker Cookbook has taken me through almost twenty years of baking and cooking and it's a treasure.

Louise, lovely to meet you too! I didn't know there was Lamington Day. I always depend on Janet's Dying for Chocolate blog to tell me about various "days". Let's hope she adds that one, too. I do use some cake mixes, although I think a mix might give too moist of a crumb for this. The square might not last through the dipping and coconut-ing. My kids have a friend who is severely allergic to milk and I find milk-free cake mixes are great for the kids' parties. :-)

I am very glad to of found this post. My hubby has been feeling home sick a lot lately and this recipe just may be something that I could fix to cheer him up. He's from Australia & work being the way it is, he hasn't been home in 10 years. I try recipes that I think are Australian but he always says "what is this?" giggle~ So I know I failed at my attempt. He always talks about missing foods so I'm going to try this. I may get this one right! Thanks for the post.

Oh good..hope they turn out perfectly, and he loves them. I enjoy your site!