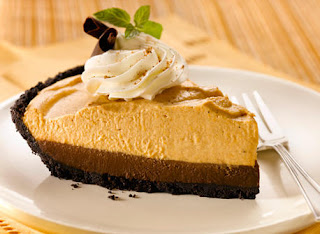 Tomorrow is Canadian Thanksgiving, and because I think all holidays should be celebrated  with Chocolate, I know you'll love this Double Layer Chocolate Pumpkin Mousse Pie. Perfect  for the holiday!  Since it's Canadian Thanksgiving, this recipe is from the Dairy Farmers of Canada website Dairy Goodness. Hope my North of the Border friends have a wonderful celebration. And, for those in the U.S., this Pie is fabulous for our Thanksgiving in late November.

The very first Thanksgiving celebration in North America took place in Canada when Martin Frobisher, an explorer from England, arrived in Newfoundland in 1578. He wanted to give thanks for his safe arrival to the New World. That means the first Thanksgiving in Canada was celebrated 43 years before the pilgrims landed in Plymouth, Massachusetts! For a few hundred years, Thanksgiving was celebrated in either late October or early November, before it was declared a Canadian National Holiday in 1879. It was then, that November 6th was set aside as the official Thanksgiving holiday. On January 31, 1957, Canadian Parliament announced that the second Monday in October would be Thanksgiving -- "a day of general thanksgiving to almighty God for the bountiful harvest with which Canada has been blessed." Thanksgiving was moved to the second Monday in October after World War II.

So here's a fabulous Pumpkin Pie for the Thanksgiving table.

Directions:
Crust:
In a bowl, combine cookie crumbs and butter until moistened and pat evenly into bottom and up side of 10-inch deep pie plate. Bake in preheated 350 °F oven for about 10 minutes or until firm. Let cool.

Whip cream. Fold half of the cream into pumpkin mixture until light. Fold in remaining whipped cream until well combined. Spread over top of chocolate layer and smooth top. Refrigerate for about 2 hours or until set and firm. (If you make ahead: you can cover and refrigerate for up to 2 days.)

Photo: Dairy Farmers of Canada
Posted by Janet Rudolph at 9:27 AM

Oh, this sounds delicious, Janet! I didn't know about the origins of my own nation's Thanksgiving. Thank you!

Would this pumpkin layer work as a stand alone, do you think? I seem to have lost my pumpkin mousse recipe and I was planing on serving it at a ladies lunch this Thursday along with witch finger cookies.

Not sure it will be high enough..Not exactly double, but should work..??