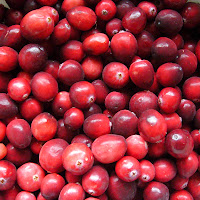 History of Cranberries (from the Cape Cod Cranberry Growers' Association)

The cranberry, along with the blueberry and Concord grape, is one of North America's three native fruits that are commercially grown. Cranberries were first used by Native Americans, who discovered the wild berry's versatility as a food, fabric dye and healing agent. Today, cranberries are commercially grown throughout the northern part of the United States and are available in both fresh and processed forms.

The name "cranberry" derives from the Pilgrim name for the fruit, "craneberry", so called because the small, pink blossoms that appear in the spring resemble the head and bill of a Sandhill crane. European settlers adopted the Native American uses for the fruit and found the berry a valuable bartering tool.

American whalers and mariners carried cranberries on their voyages to prevent scurvy. In 1816, Captain Henry Hall became the first to successfully cultivate cranberries. By 1871, the first association of cranberry growers in the United States had formed, and now, U.S. farmers harvest approximately 40,000 acres of cranberries each year.

Here are two recipes: One using fresh cranberries and one using dried cranberries. You'll love the tart and sweet together!

Directions
Melt chocolate and shortening (and sugar if you add it) over low heat, stirring frequently until melted.
Dip cranberries in chocolate until coated (remove from mixture with slotted spoon or two forks).
Place on wax paper (or parchment paper on a cookie sheet).
Refrigerate until firm.
Posted by Janet Rudolph at 1:22 PM