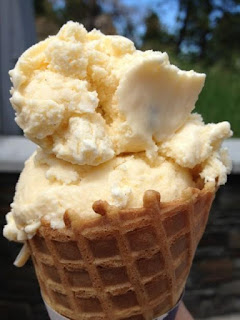 Jefferson's recipe for French Vanilla Ice Cream: Handwritten recipe on the right from the Library of Congress collection. Recipe from www.monticello.org

Put it on the fire again, stirring it thoroughly with a spoon to prevent it from sticking to the casserole.
When near boiling, take it off and strain it through a towel. Put it in the Sabottiere [the inner canister in an ice bucket], then set it in ice an hour before it is to be served.

Put into the ice a handful of salt, put salt on the coverlid of the Sabotiere, and cover the whole [thing] with ice.
Leave it still half a quarter of an hour. Then turn the Sabottiere in the ice [for] 10 minutes.