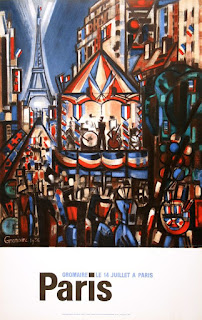 I meant to post this yesterday for Bastille Day aka la Fête Nationale: 14 juillet. This is a French holiday that commemorates the day the people of Paris stormed the Bastille prison in 1789. This violent overthrow of the monarchy made way for a republic, and the beginning of the modern nation.

Traditionally the celebration begins the night before, with big parties and balls. Then on the morning of Bastille Day the world’s largest and oldest military procession takes place in Paris, with the President of France at the head of the parade and jets flying overhead, often leaving trails of blue, white, and red. Most Parisians, and their countryside counterparts, settle in for an afternoon of outdoor parties, with lots of eating and drinking. Just as they took to the streets during the revolution, so the French take to the streets on Bastille Day, but in a much more festive way!  Perhaps without as much vigor yesterday because of the pandemic, but there were still celebrations. The day ends in a spectacular fireworks display, with the Eiffel Tower serving as a backdrop. Colorful explosions are seen across the country in smaller towns and cities as well.

So Bastille Day is a day to celebrate French food, and for this blog, French Chocolate Dessert! In the past I've posted many "French" recipes for Bastille Day--from Soufflés to Beignets to Eclairs to Crepes. So even though the day has passed, you can still celebrate and what could be more French than a Clafoutis? A clafoutis is a simple French country dessert that's comprised of sliced stone fruit over which a pancake-like batter is poured and then baked. You'll be glad to learn that there is such a thing as Chocolate Clafoutis. Following is an easy, quick, and delicious recipe adapted from the French Chef herself, Julia Child, from her cookbook Mastering the Art of French Cooking, Volume 1.You can substitute other stone fruits, such as pears, peaches, apricots, nectarines, and plums, but cherries are in season..and I love chocolate and cherries.

Blend it all together and when thoroughly combined, pour carefully over pitted cherries.
Sprinkle a handful of superfine sugar on top and bake in oven for about 1 hour.
Clafoutis rise, but they also fall quickly, so plan to eat it warm with some whipped cream or ice cream on the side.

***
Superfine Sugar
* I usually have a box of superfine sugar in my pantry, but if you don't, you can make it quickly at home.
For one cup: Grind one cup and two teaspoons of white granulated sugar in a blender or food processor for 30 seconds. Also called castor sugar, this is simply sugar that has been ground into finer crystals than regular granulated sugar.
Posted by Janet Rudolph at 8:19 AM