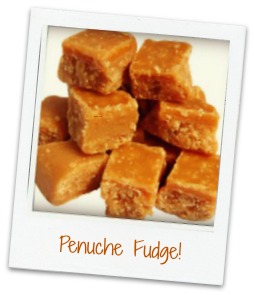 Historically, Penuche Fudge has been attributed to New England (New England Fudge) as well as some places in the South (Creamy Praline), but there are many variations in nearly every part of the world. Milk is usually boiled down to thick fudge and brown sugar is then added to it to create the distinctive butterscotch taste. This fudge is very similar to Mexican Cajeta which is also a kind of sweetened thickened goat’s milk with the same dull brown color of penuche. There are also many Indian versions of the same dish using thickened milk called as peda or milk fudge burfi. The only difference between the different regional variations is the thickness of the eventual dish. Cajeta is liquidy and can be used a as a spread, while penuche is semi-soft like a fudge and pedas or milk burfis are stiffer. But the basic ingredients in the penuche fudge recipe and preparation process are the same. Dulce du leche is another very popular version where condensed milk is thickened with hours of cooking resulting in a thick paste. Different versions of this dish are very popular all over Latin America and France even though they are given different names.

Directions
Combine brown sugar, cream, and butter in medium saucepan. Stir until dissolved. Heat to between 234 and 240 degrees F.
Remove from heat and stir until mixture loses its gloss (or process in food processor 30 seconds) Quickly stir in vanilla and nuts and spread into 9 x 9 inch dish.
Chill before cutting into squares.
Posted by Janet Rudolph at 8:51 AM