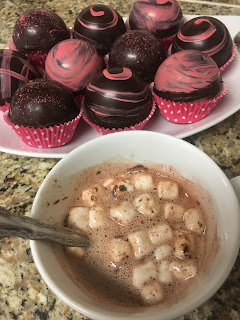 I love when my mystery and chocolate worlds collide. Amber Royer is an established chocolatier and mystery author who has graced this blog before with recipes and writing information. She writes the CHOCOVERSE comic telenovela-style foodie-inspired space opera series, and the BEAN TO BAR MYSTERIES. 70% DARK INTENTIONS was just published on July 20! Royer is also the author of STORY LIKE A JOURNALIST: A WORKBOOK FOR NOVELISTS, which boils down her writing knowledge into an actionable plan involving over 100 worksheets to build a comprehensive story plan for your novel. She blogs about creative writing technique and all things chocolate at www.amberroyer.com.

The History of Cocoa Powder

Did you know that without a nineteenth-century Dutch chemist, the modern-day chocolate bar wouldn’t exist?  Chocolate is made out of cacao beans, which grow inside the pods of the Theobroma cacao tree. Originally, the dried and fermented beans were ground into a paste, suitable for making drinks.  But grinding doesn’t provide a smooth mouth-feel.  Chocolate made its way to Europe in the 1500s.  By the 1800s, the desire to do more with chocolate led to a great deal of experimentation and innovation. 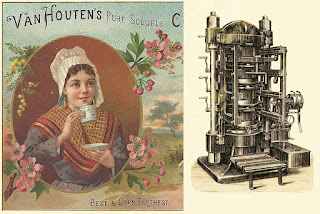 One of the most creative of these innovations was when Casparus Van Houten and his son Coenraad Johannes Van Houten decided to take a hydraulic press to the stuff.  Casparus owned a chocolate factory in Amsterdam, and his son was the aforementioned chemist.  (Sources debate whether the press was invented by father or son, though it seems logical that they were working together.)  Why was this so important?  Cocoa beans contain fat in the form of cocoa butter.  Before them, other people had been experimenting with expensive, inefficient methods of extracting cocoa butter, which involved either boiling of freezing the beans.  But using the hydraulic press, the Van Houtens were able to press a goodly amount of that fat from the cacao solids (generally, chocolate makers extract about half).  The remaining “cake” could then be pulverized into cocoa powder.


Coenraad, ever the chemist, then developed a process involving adding alkaline salts (such as sodium carbonate) to make cocoa powder that could be easily dissolved in water.  The process also intensified the chocolate flavor, and darkened the color of the cocoa powder.  This process is now known as Dutching.  To give you a feel for the difference: red velvet cake was originally made with natural (un-Dutched) cocoa powder, because it would give the cake a reddish-color.  Red velvet cake made with Dutched cocoa powder generally rely on red food coloring to get the effect.

“Ultra-Dutched,” cocoa powder is known as black cocoa powder.  Usually bakers choose this for aesthetic reasons, as the powder has been so chemically changed that it won’t react with baking powder (to give cakes rise) and results in a drier result. This is the cocoa powder responsible for the distinctive color of such iconic treats as Oreos.

The ease of access to cocoa powder led to the invention of a number of classic chocolate cakes in the 1890s and early 1900s, many of which are still made today.

Modern innovators have found a number of ways of extracting the cocoa butter, including expeller pressing (using a rotating screw to press the cacao, often assisted by steaming the nibs – or even applying infrared heat to the beans before roasting) and the use of food-safe solvents through exposure to “a food-acceptable gas.”  I even found one study exploring the use of supercritical fluid extraction, which proposed using carbon dioxide (though this appears to be still under development).

The stage was set to create eating chocolate in 1828, but the Van Houtens didn’t take the final step.  It wasn’t until 1847 that British confectioner Joseph Fry figured out how to add the cocoa butter back into cocoa powder blended with sugar that it became possible to make a substance that could actually be sold as bars.  Conching -- a process that allows for making silky smooth chocolate from either a chocolate “liquor”or directly from nibs --  wasn’t developed until 1879, by Swiss chocolate maker Rodolphe Lindt.  (Most of today’s craft chocolate makers simply conch nibs, but some do also make their own cocoa powder.)

In my book 70% Dark Intentions, my protagonist is just such a craft chocolate maker.  As she is growing her business, she starts experimenting with making cocoa powder – just in time to take a huge order for gift baskets that include hot chocolate bombs, which are a fun way to show off that water solubility of cocoa powder.

To make your own hot chocolate bombs, you will need a mold to create the half-sphere shapes (2 1/2" sphere mold, silicone or acrylic.  We used two molds with a total 12 cavities to create six bombs at a time, repeating the entire process twice to get a dozen finished hot cocoa bombs). You will also need a thermometer to make sure you achieve the appropriate temperature to temper chocolate. Other than that, you can use equipment you probably already have in your kitchen.  In the book Felicity adds cinnamon, nutmeg and cayenne to her cocoa mixture, but you can leave it plain or flavor it any way you want. 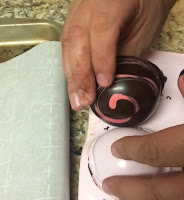 24 oz. dark couverture chocolate, chopped, melted and tempered  (You will need to monitor the temperature of the chocolate as you work to make sure it stays in temper.  I have posted instructions for tempering chocolate HERE.)
12 cupcake wrappers
3 c. mini marshmallows
12 Tbsp. Cocoa Mix (see recipe below)
Steamed milk, for serving

Polish your molds with a paper towel.  If desired, add any decoration that will be part of the chocolate. *

Spoon about a tablespoon of chocolate into the bottom of one of the cavities.  Using swift strokes, paint the chocolate upward, ensuring that you cover every bit of the sides and edge.  Repeat, one at a time, with each cavity, making sure to maintain the temperature of the chocolate as you work. Refrigerate the completely painted molds for five minutes. Add more chocolate to one of the cavities and paint a second coat of chocolate, making sure to fortify the rim of the sphere half.  Repeat with the remaining cavities. Refrigerate the completely second-coated molds until completely set, 5 to 10 minutes. **


Release the chocolate half spheres from the molds and place 6 of them rim side up in the cupcake wrappers.  Fill each half sphere with 1 tablespoon of cocoa mix and ¼ c. marshmallows.

Wear gloves for the remaining steps to avoid getting fingerprints on the chocolate shells.  Heat a dry skillet over medium heat.  Take one of the remaining half sphere and place it rim-side down for a few seconds in the heated skillet.  Immediately place it on top of one of the filled half spheres and press gently for a second or two to form a light seal.  One at a time, place each cocoa bomb onto the rim of a glass or a tall round cookie cutter, or whatever you can find to stabilize it as you work.  Brush a little melted chocolate around the joined edge to seal any cracks.

Decorate if desired, with sprinkles on the seal, or drizzles of white chocolate over the top, or any other edible design elements.

To serve: Place one hot cocoa bomb in the bottom of a large mug.  Pour the steamed milk over the cocoa bomb and watch it melt open and the marshmallows pop up to the top.

* I used colored cocoa butter, painted in different patterns onto each cavity of the molds using a paintbrush, to add a pop of color. I chose pink because it reflects the cinnamon in the cocoa mix.

** If using acrylic molds, instead of painting on the chocolate, you can fill the cavities with tempered chocolate, and then pour it back into the bowl, leaving a coating on the mold.  Set the mold upside down on waxed paper to continue draining, then refrigerate until set.

Place all ingredients in a medium bowl.  Whisk to combine. 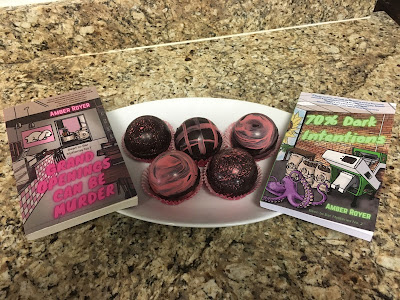