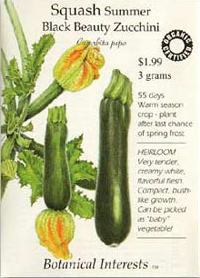 Oddly, today is National Zucchini Bread Day. That doesn't really make any sense since it's only April 25. Maybe this refers to zucchini growing Down Under? Of course you can buy zucchini all year round, but it's a summer crop in the Northern Hemisphere. So, by mid-summer if you're growing zucchini (even one plant!), you've probably run out of friends to hand zukes off to, and you're thinking of wrapping your zucchini up in a blanket, putting them in a basket and leaving them on the church steps. Consequently, you might want to save this recipe for the summer.

Unfortunately Zucchini Bread doesn't use up a lot of zucchini, but it's a tasty way of serving up your courgettes! Add chocolate and you're calling my name!

When I first started baking 'vegetable' breads, I used old coffee tins for baking pans, but that was a long time ago, and my beans come in recyclable paper bags. So now, I usually make my zucchini breads in bundt pans. Of course conventional loaf pans work, too, since this is a quick bread.

Most recipes say to let the zucchini bread cool before serving. I don't follow that advice since by the time the aroma has filled my kitchen for an hour, I'm ready to devour this Chocolate Zucchini Bread and often do! Since you, too, might make short shrift of this Double Chocolate Zucchini Bread, you'll want to make two, so double the recipe, if you plan to share.

A few comments on zucchini. Depending on where you live, zucchini may be called courgettes or marrows (remember Hercule Poirot throwing the marrow over the fence in the opening of Agatha Christie's The Murder of Roger Acroyd?) and sometimes summer squash (although in my neck of the woods summer squash is a totally different squash and a different color).

This Double Chocolate Zucchini Bread tastes great toasted with a little cream cheese or mascarpone! And, the secret ingredient: Pistachios!

Directions
Preheat oven to 350°.
In large bowl, combine eggs, sugar, oil, and vanilla. Mix until well blended.
In small saucepan, melt 2 Tbsp butter, add 6 Tbsp cocoa and blend tuntil smooth. Set aside to cool.
Peel and grate zucchini. Add zucchini and cooled cocoa mixture to the large mixing bowl and blend well.
In separate bowl, mix together flour, baking soda, salt, and cinnamon. Add dry ingredients to the batter. Stir only enough to blend in all the dry ingredients.
In another bowl, coat broken up chocolate chunks (or chips) with 2 tsp. flour.
Fold in flour-coated chocolate chunks and chopped pistachios to the batter.
Spoon batter into two greased and floured 9x5x3 loaf pans or into a greased bundt pan.
Bake 60-70 minutes or until a toothpick inserted in middle comes out clean.
Cool in pans for 5-10 minutes.
Remove from pans and continue to cool on a wire rack.
Posted by Janet Rudolph at 7:57 AM