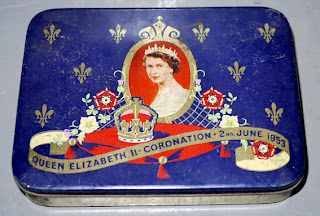 The NewWales reports that Commemorative Tins of Chocolate marking the Queen's Coronation in 1953  have been discovered untouched over half a century later.

I found the news today particularly serendipitous because my neighbor stopped by early this morning with a 400 gram Cadbury's Dairy Milk Bar she brought back from London. The bar she brought, if this huge chunk of chocolate (see photo below) could be called that,  commemorates the Queen's Diamond Jubilee.

According to the Swansea Council staff at the West Glamorgan Archive Service made the discovery of the Coronation Commemorative Tins during the Queen's Diamond Jubilee celebrations when opening up a Swansea Corporation file in the Civic Centre that had been undisturbed for nearly 60 years. The file contained two special Coronation celebration tins of Cadbury's Dairy Milk Chocolate.

The navy blue tins are in a good condition. They were accompanied by a compliment slip that said the items were aimed at commemorating the Coronation of Her Majesty Queen Elizabeth II in June 1953. "The chocolate looks in good condition and still smells like normal milk chocolate, but I wouldn't personally recommend tasting it after its being in storage for nearly 60 years!"

I think I'll eat the Cadbury's Chocolate that Jeni brought back from London! 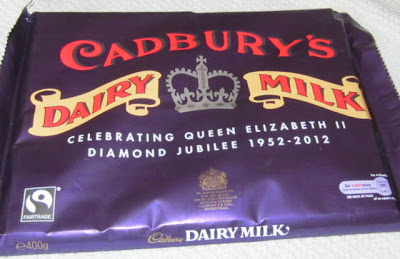 Pussycat, Pussycat, where you have been?
I've been to London to visit the Queen. 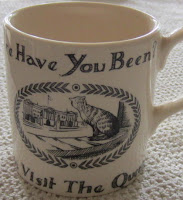 That's a great story. And a great bar of chocolate, Janet!