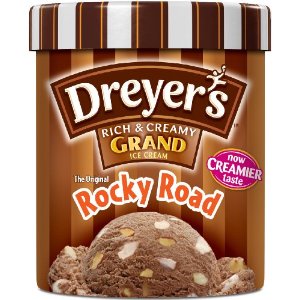 Rocky Road ice cream was 'invented' in Oakland,  CA, which makes it pretty special to me, since I live in the Oakland/Berkeley area.

One story goes that the Rocky Road ice cream flavor was created in March 1929 by William Dreyer in Oakland, CA. He cut up walnuts and marshmallows with his wife's sewing scissors and added them to his chocolate ice cream that reflected his partner Joseph Edy's chocolate candy that used walnuts and marshmallow pieces. Later the walnuts were replaced by toasted almonds.

Fenton's Creamery in Oakland claims that William Dreyer based his recipe on a Rocky-Road style ice cream flavor invented by his friend, Fentons' George Farren, who blended his own Rocky Road-style candy bar into ice cream. I still love going to Fenton's Creamery. It's an old fashioned ice-cream parlor.

Melt the butter.
Put the chocolate wafers in plastic bag. Close bag and crush with spoon or rolling pin until you have tiny pea-sized chocolate bits.
Combine melted butter with chocolate bits.
Press ingredients into 9-inch buttered pie pan. Be sure and go up sides.
Bake 10 minutes at 325°F.
Cool completely before adding ice-cream.

2. Another possibility is to make a chocolate crust and spoon in softened Rocky Road Ice Cream!! Cover and freeze.

Posted by Janet Rudolph at 6:38 AM

Today is indeed a great day! I love rocky road.

Oh no, I missed Rocky Road Ice Cream Day! I better make up for it with this recipe that I am Sooooo saving!!!

I couldn't think of a better sounding pie!
Mary x

OMG. I love Rocky Road anything. I'm heading to the store this afternoon to hunt down a carton. I suspect your Dreyer's is our Edy's as the cartons look exactly alike except for the name.