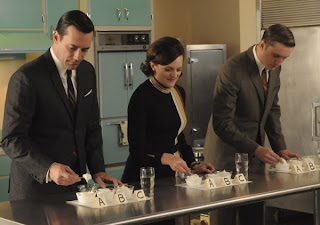 If you watched Mad Men Sunday Night, you'll know that the big pitch at the agency was for Cool Whip. Tagline: Just Taste it! Watch Peggy & Don in the Test Kitchen trying Cool Whip here:  How perfect a product for today's Food Holiday: National Coconut Cream Pie Day. Of course you can use whipped cream on your Chocolate Coconut Cream Pie, but many recipes call for Cool Whip, a "non-dairy topping".

I haven't really addressed this food breakthrough, so here goes. Cool Whip is used primarily in the U.S. as a dessert topping and in many no-bake pie recipes. It's been described as "non-dairy" since originally it contained no cream or milk and no lactose; however, it did contain the milk derivative casein. In 2010 both skimmed milk and light cream were added to Original Cool Whip. Cool Whip was introduced in 1967 by the Birds Eye division of General Foods. Within two years, it became the largest and most profitable product in the Birds Eye line of products. Birds Eye later merged with Kraft Foods and Philip Morris, eventually becoming part of Altria Group until the spin-off of Kraft Foods from Altria in 2007. In fall 2011, a new flavor, cinnamon, was introduced along with French vanilla and chocolate. In California the Fat-Free variety is labeled as Ultra-low Fat. Having said all this, I must confess that I almost never use cool whip, but don't let that from preventing you from trying it.

Prior to Cool Whip, though, there was another 60s topping that cooks in the U.S. used. It wasn't non-dairy, but it was 'quick and easy', and it was called Dream Whip. It is still available from Kraft Foods. Dream Whip is a powdered dessert topping mix that's 'ready in 4 minutes'. It's prepared by adding cold milk and vanilla and whipped until light. In my opinion, if I'm going to go to all that bother of adding and mixing, why not mix up some real whipped cream? The calories? Maybe, but the taste of real whipped cream can't be beat!

Recently I found the Baker's Chocolate and Coconut Favorites Cookbook (1965). From cakes to pies to cookies, this cookbook has some great recipes and some very funny dated comments about women and cooking.  For example, the beginning line in the section on pies, "Small wonder that women take pride in their pies'... well yes, but so do men." Still I imagine most of the pies at pie contests at the county fair in 1965 when this cookbook was published were made by women. And, as we saw from the Mad men episode, women were the market for non-dairy topper!

To make Chocolate Coconut Cream Pie, make the meringue pie in the recipe below, but omit the meringue. Top pie with 1 cup prepared Dream Whip or Whipped Cream. (or Cool Whip). 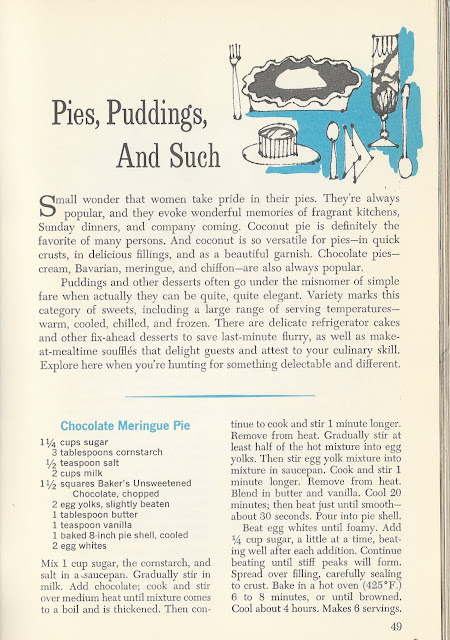 Posted by Janet Rudolph at 7:39 AM

i know better, I really should wait until I have breakfast to read your blog posts!