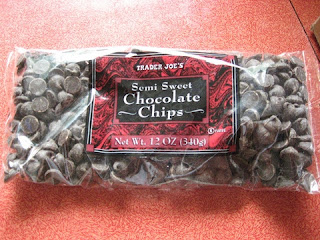 According to the Jewish Daily Forward, a chocolate chip supermarket sweep was caused by the announcement of a label change in Trader Joe's Chocolate Chips. The product itself hasn't changed. The manufacturing company has changed its cleaning process, forcing a "may contain traces of dairy" label to be added to the chips. The possibility that the product will have dairy means that the new version is no longer Kosher when eaten with meat.  Just an FYI: The Trader Joe's Chocolate Chips are still Kosher 'dairy', just not pareve.

Kosher consumers appreciate the pareve designation on chocolate chips because it allows for the substitution of non-dairy chocolate chips in baking for desserts following a meat meal.

As soon as the news that Trader Joe's would substitute the OK pareve hekhsher (kosher certification symbol) for a dairy one, discussion threads were launched on Facebook describing how favorite recipes for trail mix and chocolate chip challah would be an impossibility without the pareve chocolate chips from Trader Joe's. An online petition was started to urge Trader Joe's to reverse the decision.

I did a little research, and a good substitute for these chips would be Enjoy Life Chocolate Chips. They're definitely 'pareve'. Available at Whole Foods and some Target stores and online.

Whole Foods also sells vegan chocolate chips that are non-dairy. I don't think they're quite as tasty, and they're definitely more expensive. I'm not sure they're Kosher (and I should have checked when I was at the market), but if it's a non-dairy chip you want for allergy reasons, you can use these.

Posted by Janet Rudolph at 7:02 AM