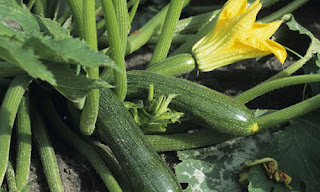 So what to do with it? Add Chocolate!

This recipe is from Animal, Vegetable, Miracle: A Year of Food Life (2007) by Barbara Kingsolver with Steven L. Hopp and Camille Kingsolver. I've added walnuts, because I like a little crunch.  The book should be a staple on your shelf. It's part memoir, part journalistic investigation. It tells the story of how the family was changed by one year of deliberately eating food produced in the place where they live. Barbara wrote the central narrative; Steven's sidebars explore various aspects of food-production science and industry; Camille's brief essays offer a nineteen-year-old's perspective on the local-food project, plus nutritional information, meal plans and most importantly for this blog, the recipes. Being that it's mid-summer: there's a Zucchini Season Meal Plan in the book. The recipes are all fabulous, but I decided to post the recipe for Zucchini Chocolate Chip Cookies. As I mentioned, I added walnuts for extra crunch.

Stir these into other ingredients, mix well. Drop by spoonful onto greased baking
sheet, and flatten with the back of a spoon. Bake at 350F degrees, 10 to 15 minutes.

Posted by Janet Rudolph at 6:41 AM

Thank you for this Chocolate Chip Cookies recipe.I will try to make it.
double chocolate chip cookie recipe

Yum--these sound amazing! This post also reminds me that our local food co-op will only be selling chocolate-zucchini muffins for a couple of more weeks.*sigh*