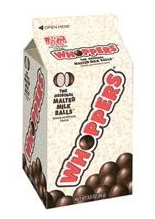 If you're like me, you've always wondered about Malted Milk Balls. What are they really?

Lots of companies make them now, but when I was growing up, I only remember one: Hershey's Whoppers Malted Milk Balls.  But there are other "old fashioned' brands such as Maltesers.  Maybe they weren't available at my candy store? Ghirardelli  makes Milk Chocolate Malt Balls.  (There's also a Kittymalt Hairball remedy that I have, but I won't go there).

These malt ball center only candies can be enrobed in the very best chocolate. You can do it yourself in the same way you make chocolate covered nuts. Just melt some chocolate and dip. I use two forks to make it easy. Dry them on a parchment lined baking sheet.

Want a fabulous use for Malted Milk Balls? Well, besides eating them at the movies? Sunset Magazine had a great recipe last month for Malted Milk Ice Cream Pie. I definitely love using candy in pies and cakes. This ice cream pie has crunchy malted milk balls on the bottom, malt ice cream above it, and a layer of dark chocolate frosting. Add some whipped cream and sprinkle with chopped and whole malted milk balls when you serve, and you're good to go. 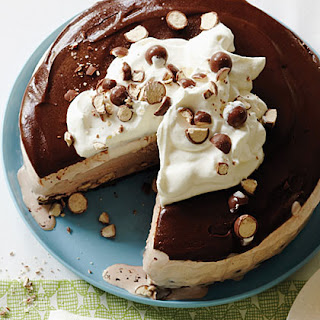 Preparation
1. Arrange a tight layer of malted milk balls (3 cups) over crust. Stir ice cream with cocoa powder and malted milk powder until smooth. Spoon into crust, set on a plate, and freeze 5 hours.
2. Heat 1/2 cup cream meanwhile until simmering. Put chocolate in a small metal bowl, pour in cream, and let sit until chocolate is melted, about 2 minutes. Stir until smooth. Let cool completely.
3. Smooth chocolate ganache over top of pie and freeze until set, about 15 minutes.

Tips:
Let the pie soften for 5 minutes at room temp to make slicing easier.
If you're having trouble freeing your pie from its pan, set it over a bowl of hot water for a couple of minutes and then slide a thin knife between the pan edge and the crust. It should pop right out.
Make ahead: Once the pie is fully frozen through step 3, it keeps for up to 4 days, double-wrapped in plastic wrap. Top it just before serving.