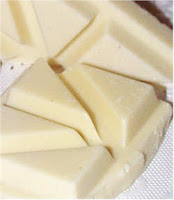 The process: When the chocolate liquor is pressed, the fat is removed. This fat is called cocoa butter, and it is the primary ingredient in white chocolate. In plain chocolate, the cocoa butter is reblended with the cocoa solids from the separation process in order to make unsweetened chocolate.

Green & Black's uses cocoa butter, pressed directly from the crushed cocoa beans. They also use a blend of milk and Bourbon vanilla. Available in 3.5oz bars.

Jenn on Bread and Butter had a fabulous recipe for White Chocolate Brownies with Peanut Butter Chips and Pecans this week. Talk about luscious. I've tweaked it only a little bit. This recipe is reprinted with her permission.

Melt the white chocolate chips in a bowl with the water. Heat in the microwave for 1 1/2 - 2 min or until melted. Stir the mixture after the first minute to combine. Or use the double boiler method. Bring some water to a boil in a small pot. Once the water is boiling bring it down to a simmer. Place the chocolate and water in a metal bowl and place on top of the pot. Stir chocolate occasionally to combine until melted.

In another bowl, cream together butter and sugar. Then add in the eggs, mixing after each one. Add in vanilla, then the melted white chocolate. Combine well then slowly add the flour mixture. Mix well until there are no lumps.

Add in the peanuts butter chips and pecan pieces.

White chocolate can be used in many different recipes to give a new look. Its taste is also a bit different from the usual dark chocolate, apart from all these recipes, fruits like bananas, apples and strawberries can also be dipped in white chocolate. They just look amazing and very appetizing.