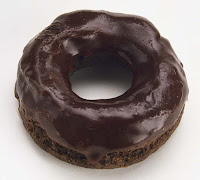 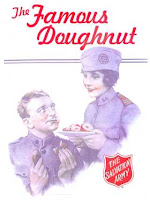 For a wonderful entry about Donut Day, you'll want to go to: Months of Edible Celebrations' website. Not only is there a great discussion of the history, but Months of Edible Celebrations includes recipes from The Donut Book by Sally Levitt Steinberg, granddaughter of Adolph Levitt, the inventor of the first doughnut machine (1920). As Louise says in her entry, "Sally brings the doughnut to life." You've got to read this.

And to celebrate Doughnut Day, several doughnut places have:

Krispy Kreme: Visit a participating Krispy Kreme store for a free donut. One per customer. Fewer and fewer of these stores around these days.

Dunkin' Donuts: Participating stores will be giving away a free donut of your choice with any beverage purchase.

LaMar’s Donuts – Participating stores will be giving a complimentary Ray’s Original Glazed donut to customers in honor of the founder, Ray Lamar. No purchase necessary.

Bashas' in Arizona will be delivering dozens of fresh-baked donuts to police departments in Phoenix, Scottsdale, Mesa, Chandler and Glendale. They will also donate 10% of their donut sales on Donut Day to the Salvation Army.

Think you know something about donuts? Check out LaMar's Donuts for a quiz on donuts. A donut by any other name? churro (no hole), Beignet (no hole)... they're not donuts to me.

Want to be a bit more upscale with your doughnuts? Many bakeries, specialty shops and restaurants around the U.S. will be offering special doughnuts on June 5. Neal Fraser of Grace Restaurant in Los Angeles is offering a doughnut tasting menu with wine pairing. Sadly no chocolate doughnuts.

Patronize your favorite doughnut shop today! Love to hear where and how you celebrate.

Here's an original Salvation army recipe for Doughnuts (not chocolate), but fun from an historical perspective.
Posted by Janet Rudolph at 6:34 PM

Oh Janet, Thank you so much for the donut love link. How sweet of you. If I ate donuts, I'd have to make mine chocolate too!!!

I'm so loving your Chocolate blog. It indulges my sweet tooth while saving me calories:)