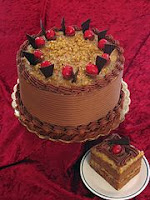 Some History:
In 1852, Sam German created a dark baking chocolate bar for Baker's Chocolate Company, and in his honor, the company named it "Baker's German's Sweet Chocolate." In most recipes and products today, the apostrophe and the "s" have been dropped. In 1957, probably the first published recipe for German's chocolate cake showed up in a Dallas newspaper and supposedly came from a Texas homemaker. The cake quickly gained in popularity and the recipe together with photos spread all over the country. America fell in love with German Chocolate Cake, and food editors were swamped with requests for information on where to buy the chocolate. In one year, there was a 73% sales jump in German's Baker Sweet chocolate sales (then owned by General Mills). I grew up with Baker's chocolate as the baking chocolate we used for brownies and other chocolate recipes. German Chocolate Cake is also regular item in bakeries and supermarkets across the country, and there are mixes in most markets.

However, the cake most likely didn't originate from a Dallas housewife. Buttermilk chocolate cakes were popular in the South for over 70 years, and pecans were plentiful, also, to
make the frosting. Point of fact: German's chocolate is similar to a milk chocolate and sweeter than regular baking chocolate.

Here's the "Original Recipe." I found this specific recipe in many places on the Internet, and I daresay no one can claim it as its own. Actually in 1957, Baker's was flooded with messages from newspapers demanding the recipe. So even if you think you're making Grandmom's recipe--and it might be with a few changes over the years- the following is a basic one that millions use. That's not to say I didn't find several unique recipes for German Chocolate Cake that peaked my interest. But those are for another time.

Have a wonderful German Chocolate Cake Day on June 11!

Top photo from Wikipedia. My cakes never look like this, but something to aspire to...

Posted by Janet Rudolph at 3:27 PM

We have just added your latest post "Dying for Chocolate: German Chocolate Cake Day" to our Food Directory . You can check the inclusion of the post here . We are delighted to invite you to submit all your future posts to the directory for getting a huge base of visitors to your website and gaining a valuable backlink to your site.

If there's one cake that deserves a birthday all its own, German Chocolate Cake wins the spotlight. Thanks for the side of history Janet. Always a welcome addition.

Thanks for posting this! Hope it's okay, I posted the recipe on my site (and gave you credit for it). http://SnackAttackHQ.com

Well, I did grow up in Texas and for many years my birthday cake of choice was German chocolate cake. This brought back memories

Whenever there is a birthday in my office, the girls always ask me to make German Chocolate Cake...actually demand it! lol! Also will make it on June 11!