Simple Chocolate for the Sick 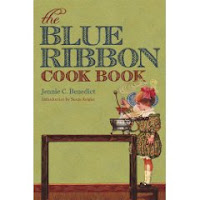 My friend Janet Appel just got back from Kentucky where she received a reprint of an old cookbook--The Blue Ribbon Cook Book by Jennie C. Benedict (1860-1928). Benedict was once a famous caterer in Louisville, owned a tearoom and soda fountain, and trained with Fannie Farmer at the Boston Cooking School.

The book contains a chapter on "Simple Dishes for the Sick." Interestingly many of those recipes have alcoholic ingredients in this Prohibition edition of the cook book.

Mix cocoa and sugar add enough of the water to form a paste. Stir in remainder of water and boil one minute then add wine. Useful in cases of chill or exhaustion.

There are also menus. Here is one of several that had chocolate.

Sure sounds like a lot of food for a "dainty menu".

Publisher's note on the latest edition of Jennie C. Benedict's The Blue Ribbon Cook Book: Jennie C. Benedict's "The Blue Ribbon Cook Book" represents the very best in the tradition of southern regional cooking. Recipes for such classic dishes as Parker House rolls, lamb chops, corn pudding, Waldorf salad, and cheese and nut sandwiches are nestled among longtime local favorites such as apple butter, rice pudding, griddle cakes, and Benedictine, the cucumber sandwich spread bore Benedict's name. Throughout the cookbook, Benedict's delightful voice shines. Benedict, who was once the most famous caterer in Louisville and also operated a celebrated tea room and soda fountain, trained with Fannie Farmer at the Boston Cooking School. Five editions of Benedict's famous cookbook were published, and her aim in sharing her recipes was simple; as she mentions in the preface, "I have tried to give the young housekeeper just what she needs, and for more experienced ones, the best that can be had in the culinary art." As a creative entrepreneur, Benedict had a significant influence on the local culture and foodways. Her sweet and savory dishes were the stars of many Derby parties, and yet she placed equal emphasis on simple luncheon and dinner recipes to satisfy the needs of home cooks. While her popular dishes graced genteel tables all over the Bluegrass, Benedict's chicken salad sandwiches, sold from a pushcart, offered Louisville children the first school lunches in the city. This new edition of "The" "Blue Ribbon Cook Book" will now welcome new generations of readers and cooks--those who remember wearing white gloves and eating delicate tea sandwiches at the downtown department store as well as those who want to make satisfying regional classics such as blackberry jam cake like their grandmother used to make. Food writer Susan Reigler introduces the story of Benedict's life and cuisine, and this edition is the first to come complete with the now-famous spread that bears Benedict's name.

Posted by Janet Rudolph at 6:44 PM

Email ThisBlogThis!Share to TwitterShare to FacebookShare to Pinterest
Labels: Simple Chocolate for the Sick

Benedict has been called the Julia Child of her era. The cookbook has many recipes we will be using. And some we were using not knowing they came from Benedict.

Maybe I will find something for our pot luck next week.