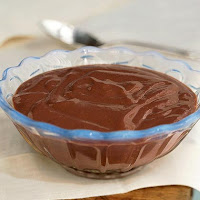 June 26 is Chocolate Pudding Day. In this economy, pudding as we know it in the U.S. can be very economical. Just open a box and mix or pull off the top and eat. General Foods (Jell-O) introduced chocolate pudding mix in 1934 as "Walter Baker's Dessert". It was renamed "Jell-O Chocolate Pudding" in 1936.

There are two types of chocolate pudding: a boiled then chilled (like a custard set with starch) which is popular in the U.S, Canada; and a steamed/baked version similar to cake that is popular in the UK, Ireland, Australia and New Zealand. Not to confuse you, but in the U.K. pudding is also a word that is often used to refer to any dessert, as in "We had a strawberry tart for pudding."

The American version of chocolate pudding is a variation on chocolate custard, with starch used as thickener rather than eggs. Of course, I've seen recipes using egg yolks that still has that creamy consistency. Always a variation.

Pudding was thought of as an appropriate food for the sick and children, as well as dessert. Many were the days when I was a child that chocolate (and occasionally vanilla) pudding was given to us when sick. Even the mixes took time. There was water and sugar? to add, and then mix, heat and cool. A few steps less, but still a production. I liked my chocolate pudding hot right out of the pot and loved to scrape the bowl and eat the hot pudding. Here's a recipe for easy chocolate pudding.

Mix sugar, cornstarch, cocoa and salt in saucepan. Stir in milk, cook over medium heat, stirring constantly until thick. Stir and cook 3 minutes longer; stir in vanilla and cook for another minute or two. Cool in refrigerator uncovered for a few hours.

Photo is not mine. Haven't made pudding in awhile, but aim to do so soon.
Posted by Janet Rudolph at 9:15 AM

Oh no! I missed Chocolate Pudding Day! We had Chocolate pudding every Sunday night while my parents watched the Perry Como Show...

I was the designated pudding maker...scraping the pot and licking the spoon is still the best!

Thanks for the recipe! I think I'm going to try it, but using artificial sweetener.

Lately we've been using Jello sugar-free cooked pudding mix to use the milk from our goats. Delicious, but maybe homemade is even better?