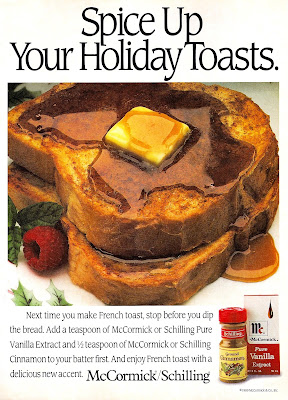 Today is National French Toast Day. French toast is not actually French at all. It predates the founding of France. According to the Apicius, a collection of recipes from the early 5th century AD, the dish we now know as French toast existed as early as the age of the Roman Empire. In their style of French toast, called Pan Dulcis, Romans would soak bread in milk (and sometimes also egg) mixture, then fry it in oil or butter.

Here's an easy recipe for S'mores French Toast. I love s'mores. The good news? You don't have to be in the woods to make S'mores French Toast. You can make this on the stovetop. It's a great brunch treat. There are many versions of this recipe, but I tend to like the marshmallows and chocolate within the bread. Some people like marshmallows on top. Some people use Marshmallow Fluff. Maybe you'll come up with your own version!
Bookmark this recipe for the holidays, too!

Directions
In shallow bowl, whisk together eggs, milk, vanilla, and salt.
Dip bread into egg mixture, coating each side.
Press both sides of bread into graham cracker crumbs.
Melt about 1/2 tablespoon of butter on griddle (or skillet) for each slice of bread.
Cook until brown and crispy, then turn over, adding more butter to pan first.
While still hot, for each serving, stack 3 slices of french toast, layering marshmallows, and chocolate in between.
Repeat with second stack.
Drizzle with chocolate sauce
Posted by Janet Rudolph at 8:36 AM