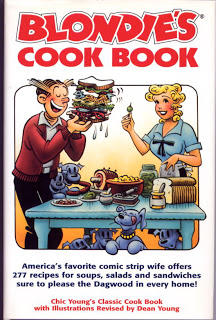 What is more fitting for National Sandwich Day than Dagwood's Chocolate Sandwich? I believe that Dagwood would probably have added lots of other ingredients such as bananas and peanut butter, and that would be great, but how can you go wrong with chocolate, butter, and bread?

I've posted several Chocolate Sandwiches over the years,  so today I turn to my "Tie-In" Cookbook collection and specifically Blondie's Cook Book for today's recipe. Dagwood is the iconic King of Sandwiches. My Dad used to make Dagwood Sandwiches... they were sandwiches that contained every thing but the 'kitchen sink'. FYI: My father never added chocolate.

According to the creator of the comic strip, Murat Bernard “Chic” Young (1901-1973), the only thing that Dagwood could prepare in the kitchen was a mountainous pile of dissimilar leftovers precariously arranged between two slices of bread. Dagwood became known for his huge sandwiches he created on evening forays to the refrigerator. The comic strip is produced today under the direction of the creator's son, Dean Young, and the strip has continued to keep up with the times. 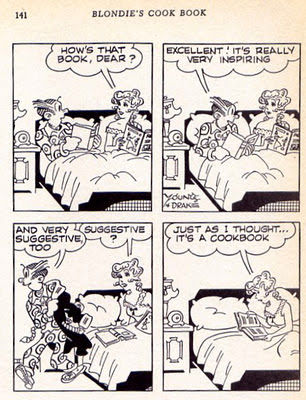 CHOCOLATE SANDWICHES RECIPE: Not sure how many sandwiches (or layers) this is supposed to make, but that's a lot of sugar, even if the chocolate is probably sugarless. I've never followed this recipe, so I'm thinking the amount of sugar might be a mistake. 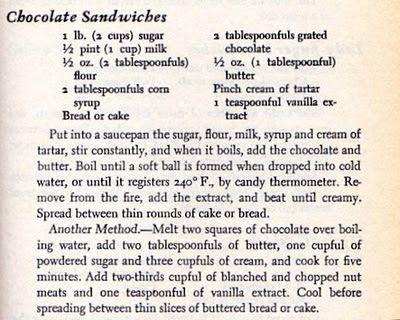