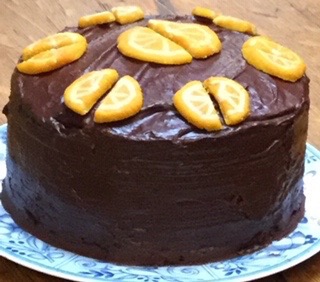 I love when my mystery and chocolate worlds collide. Here's a guest post from a new mystery author but old friend, Carol Glaser. Yum!

This Chocolate Orange Marzipan Cake was my 60th birthday treat. I started with a recipe for Salted Chocolate Rye Cake that I found at Baking with Aimee and made changes based on our household's dietary restrictions (less salt, spelt flour instead of wheat flour, blood orange olive oil instead of butter, orange juice instead of cream). I added marzipan because, well, you know, it's marzipan.

When I had all my ingredients gathered and thought I was ready to start baking, I realized that the original (British) recipe measures the ingredients in grams and milliliters, rather than the ounces and cups I'm used to. I set to work converting the measurements but then thought, Wait—I could be shopping for new measuring cups! This calls for a trip to the kitchen store! Yippee! I love shopping for new gadgets. And I almost made it to the car before I realized, Wait—I already have a scale that will weigh in grams and a measuring cup with mils conveniently located opposite ounces. So, no shopping. Which was just as well because I already have plenty of kitchen stuff. I never get rid of anything. (I still bake my Passover sponge cake in the dented aluminum pan that I inherited from my grandmother 30 years ago. She watches over the baking.)

In a food processor, combine the dry ingredients and pulse to mix. Add the wet ingredients and mix until a ball is formed. It should be pliable but not sticky. Wrap and store in the fridge. 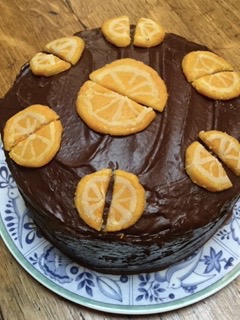 Sift the dry ingredients (flours, cocoa, baking powder, and soda), and stir in the orange zest. Set aside. Using a stand mixer, beat the olive oil and sugar for a couple of minutes. Add the eggs and extracts. On low speed, slowly add the dry ingredients and orange juice, alternating. Divide the batter evenly among three oiled and floured 8" cake pans and bake in a preheated oven (325 in my convection oven). The cake is done one when a toothpick comes out clean and the center springs back when touched. Let cool for 10 to 15 minutes before removing from pans and finish cooling on racks.

Place the chocolate in the bowl of a stand mixer. Pour the hot OJ over the chocolate and let sit for a minute to let the chocolate melt, then mix at low speed until combined. Slowly add the oil.

The leftover marzipan can be used for decorations. The oranges on this cake were my first attempt. I had a lot of fun and was happy that they got the general idea across. I put a piece of undyed marzipan aside for the pith and kneaded orange dye (about 20 drops of yellow to one drop of red) into the remainder, adding a bit of almond flour when it got wet. I rolled the dyed marzipan into a tube, cut slices from the tube, and decorated with the undyed "pith."

Despite the many substitutions, the cake itself came out dense and fudgy, as described in the original recipe, and was delicious with the orange and almond flavors.

Carol Glaser is the author of Down the Well: A Trump Era Mystery, which was longlisted for the 2019 CWA Debut Dagger and is now out in the world, looking for an agent. It is set in a kitchen store.
Posted by Janet Rudolph at 1:21 PM

Oh. My. Three layers of chocolate. And orange? You have my full attention!