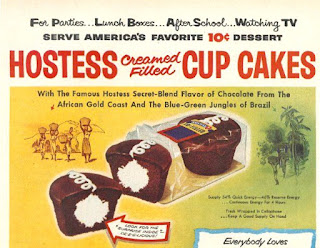 Today is National Chocolate Cupcake Day, so I thought I'd post a homemade recipe for a nostalgia chocolate cupcake: Hostess CupCakes. FYI: Hostess CupCakes are back on the shelves after a short hiatus, so you can also buy them today. But-- they'll taste so much better if you make your own.

Hostess CupCakes were produced and distributed by Hostess Brands. The basic Hostess CupCake is a chocolate cupcake with chocolate icing and vanilla creme filling (Marshmallow Fluff flavor), with distinctive squiggles across the top. Hostess claims that it was the first commercially produced cupcake. Maybe. I grew up with TastyCake cakes and pies, and the Chocolate Cupcakes were my favorites. TastyCake makes the same claim about first produced.

From Wikipedia:
The Hostess CupCake was first sold on May 11, 1919. According to author Andrew F. Smith, it was the first commercially produced cupcake, originally produced by the Taggart Bakery as the Chocolate Cup Cake. Hostess has also claimed that it was "the first snack cake ever introduced to the market. In 2004, rival Tastykake disputed this claim, claiming that Tastykake introduced the first snack cake.
Originally, two cupcakes were sold for five cents. Until 1950, the Hostess CupCake did not have any filling or the white squiggly line across the top.

In 1947, D.R. "Doc" Rice, who started his career at Hostess in 1938 with a job that entailed dumping baked cakes on a table, was given the task of developing the Hostess CupCake further. These developments culminated in an updated cupcake in 1950. A white line consisting of squiggles was added to the top in order to distinguish the Hostess CupCake from other brands. The vanilla creme filling was also added. Rice got the idea for using a creme filling when a new machine for injecting filling into Hostess Twinkies became available. Improvements were also made to the cake mix and the chocolate icing in 1950. 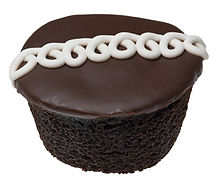 Directions
Preheat oven to 350°F.
Line a 6- and 12-muffin tin with paper liners.

Cupcake Batter:
In bowl of heavy-duty stand mixer, cream 2 sticks of butter and granulated sugar together at medium speed, just until light and fluffy, about 1 minute. Add eggs, one at time, and mix just until combined. In measuring cup, stir 1/2 the cup of hot water and cocoa together until smooth. Add cocoa mixture to butter mixture and mix on low speed for additional 10 seconds.
In medium bowl, whisk together flour, baking soda, and salt. With mixer on low speed, gradually add flour mixture to butter mixture in batches alternating with milk, beginning and ending with flour and beating after each addition until ingredients are just blended.
Fill each prepared muffin cup half full with chocolate batter.
Bake for 22 to 25 minutes, or until toothpick inserted in middle comes out clean. Let cool completely on wire rack.

Filling:
Using clean bowl and stand mixer or electric hand mixer, beat marshmallow fluff, 1/3 cup butter, and 1/3 cup powdered sugar together until combined and fluffy, about 1 minute. Using handle of small fork or spoon, make hole in the top center of each cake. Gently rotate the utensil in each hole to create a small cavity at each opening. Transfer the filling to a piping bag and pipe in just enough marshmallow mixture to fill each hole.
Make sure it doesn't explode; once you feel it growing in size, stop infusing. Use wet fingertip or  back of spoon to tamp down marshmallow peaks, ensuring filling is even with top of cupcake.

Frosting:
In small saucepan, heat cream over medium heat until bubbles form at edges. Add chocolate and remove pan from heat, stirring until chocolate melts. Add 1 1/2 tablespoons butter and continue to stir until smooth. Let cool for three minutes.
Transfer chocolate to large deep glass bowl. Dip top of each cupcake into chocolate to coat, letting the excess chocolate drip back into the bowl.
Let the cupcakes rest on a wire rack set over paper until chocolate is set, about 30 minutes.

Frosting decoration:
In small bowl, beat 1/4 cup butter and 1/2 cup of powdered sugar together until smooth, about two minutes. Transfer frosting to piping bag and decorate top of each cupcake with squiggles. Serve immediately. Store in an airtight container for up to 2 days.
Posted by Janet Rudolph at 8:17 AM