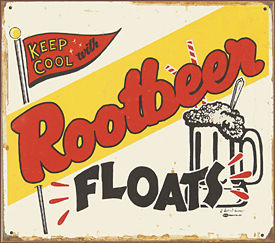 So what exactly is a Root Beer Float? Well, a root beer float is made from Root Beer and vanilla ice cream. To make a 'traditional' root beer float, add the root beer to a tall chilled glass, leaving a bit of room in top. Then slowly add a scoop of vanilla ice cream to the glass. Drizzle a small amount or root beer on top, and it will turn to foam. You might want to put a plate under the glass, because when the ice cream begins 'to float', it sometimes bubbles over! Sometimes people just mix the two together, but I like the very float-y way. A Root Beer Float is traditionally made with vanilla ice cream, but you can also make a Root Beer Float with Chocolate Ice Cream--it would be called either a brown cow or a black cow, depending on where you live. Each region in the U.S. has its own names. No surprise there!

But maybe you want to do something even more special than making an ice cream float to celebrate the day, but still maintain the root beer float flavor. And, you want to include lots of chocolate. I'm a huge fan of bundt cakes. They're easy and pretty! Well, then this recipe from the BrownEyedBaker is perfect. There's chocolate in both the Bundt Cake and the Frosting. Personally I rarely frost my bundt cakes, and I feel this cake has the flavor of the root beer float, but if you're all about frosting, make the frosting and ice the cake! Actually the frosting, itself, tastes like a root beer float! Lick the bowl!

Directions
Put all ingredients in food processor. Pulse in short bursts until frosting is shiny and satiny, scraping sides of food processor a few times. (You can always use hand mixer or standing mixer)
Using spatula, spread frosting over cake in a thick layer. Let frosting set before serving.
Posted by Janet Rudolph at 8:18 AM

At a gelato place recently I tasted sarsparilla gelato that tastes just like root beer. It would be great as a topper on your cake (maybe unfrosted version).