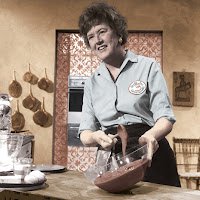 Julia Child was born on August 15, 1912. She has inspired millions of amateur cooks and professional chefs with her skills, easy kitchen spirit (how can we forget the chicken?), and passion for learning, since her first cooking program aired on public television in 1963.

Child began with a sincere passion for good food and the pleasures of cooking, studying in France in the '50s with chef/friend Simone Beck. With the help of Louisette Bertolle, another dedicated food lover, they created a cooking school called L'Ecole des Trois Gourmandes and later, in 1961, completed their groundbreaking cookbook, Mastering the Art of French Cooking.

Her book and television show that followed made the mysteries of fancy French cuisine approachable, introducing gourmet ingredients, demonstrating culinary techniques, and most importantly, encouraging everyday "home chefs" to practice cooking as art, not to dread it as a chore.

Julia Child passed away on August 12, 2004. Today would have been her 104th birthday. So in honor of the day, here's her recipe for Chocolate Mousse! Be sure and scroll to watch the video at the end from her TV series The French Cook.

Directions
1. Heat a saucepan one-third full with hot water, and in a bowl set on top, melt together the chocolate, butter and coffee, stirring over the barely simmering water, until smooth. Remove from heat.
2. Fill a large bowl with ice water and set aside.
3. In a bowl large enough to nest securely on the saucepan of simmering water, whisk the yolks of the eggs with the 2/3 cup of sugar, rum, and water for about 3 minutes until the mixture is thick, like runny mayonnaise. (You can also use a handheld electric mixer.)
3. Remove from heat and place the bowl of whipped egg yolks within the bowl of ice water and beat until cool and thick, as shown in the photo above. Then fold the chocolate mixture into the egg yolks.
4. In a separate bowl, beat the egg whites with the salt until frothy. Continue to beat until they start to hold their shape. Whip in the tablespoon of sugar and continue to beat until thick and shiny, but not completely stiff, then the vanilla.
5. Fold one-third of the beaten egg whites into the chocolate mixture, then fold in the remainder of the whites just until incorporated, but don't overdo it or the mousse will lose volume.
6. Transfer the mousse to a serving bowl or divide into serving dishes, and refrigerate for at least 4 hours, until firm.

Not clear enough? Watch this Julia Child make this on The French Chef

Posted by Janet Rudolph at 7:20 AM