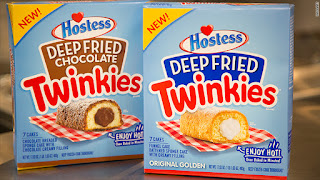 Deep-fried Twinkies are no longer just for state fairs and those with deep fryers at home. Hostess Brands, the makers of Twinkies, launched Deep Fried Twinkies yesterday. The new Twinkies can be found in the frozen food section at Walmart for the next three months, and after that will be available at other stores. The cream-filled snack in vanilla or chocolate is the result of a yearlong collaboration between Hostess and Wal-Mart, as both companies look to spark food sales with innovative products.

Battered and partially fried before being frozen, these Twinkies need to be finished for a short time in the oven, toaster oven, or frying pan. They'll cost $4.76 for a box of seven.

The treats were inspired by consumers who have been deep frying Twinkies at home and at fairs for years. But while a deep-fried Twinkie may taste great, it’s not exactly a healthy snack. No surprise there. Coming in at 9 grams of fat and 220 calories, Deep Fried Twinkies have double the fat content of a regular Twinkie. The treats, which come in chocolate and vanilla, are in with line the "caloric decadence," the brand is known for.

Hostess hoped to recreate the state fair staple, but it wasn't easy. The company tested prototypes at its Kansas City, Missouri, headquarters, and considered making it a restaurant product. Then Wal-Mart approached them. Executives at Hostess, which also has an office near Wal-Mart's headquarters in Arkansas, came to Wal-Mart, and cooked in the kitchen with them.

"The original samples were pretty good," said John Pearson, Wal-Mart's senior buyer for frozen foods. "But the batter was a little lumpy."Hostess wanted a baking time of less than 10 minutes - with the right amount of oozing filling and a crispy texture. When baked, the Deep Fried Twinkies do come out a bit crispy, but aren't an exact match for the ones at fairs or restaurants.

The Name: Hostess considered Carnival Twinkie, Boardwalk Twinkie and the Light and Crispy Twinkie. But Pearson and other Wal-Mart executives encouraged Hostess to call them what they are: Deep Fried Twinkies.

This product marks the first time Hostess Brands has developed a product for the frozen foods section; a move that is a smart extension of the brand into another section of the grocery store.

Want to make your own Deep Fried Twinkies?

Directions
Heat oil in deep fryer to 380 / 400 degrees.
Combine wet ingredients in one bowl, whisk dry ingredients in separate bowl. Combine both into one bowl blending together.
Set in refrigerator for 20 minutes.
Place wooden stick into end of twinkie, sprinkle with flour to create light dusting on Twinkie.
Dunk Twinkie into mixture and then place in fryer.
Fry for 2 - 5 minutes, until golden brown on both sides.
Remove, let oil drain, let set for a few minutes.
Posted by Janet Rudolph at 7:40 AM