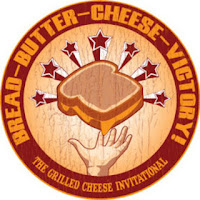 I love my Panini Press, but this one should be made on the stove in an iron skillet. My mother used to make her fabulous grilled cheese sandwiches in an old iron skillet with the top of a small iron lid pressing down on the sandwiches. Both were inherited from my grandmother. I have the lid (with a 1950s era blue handle), but not the original skillet. Interesting what we hold on to.

This recipe is great for Sunday Brunch. It's sweet, so if you'd like another version, just add a bar of chocolate, some cheese--and place in between buttered challah or another bread. This recipe is too creamy ( and oozing) for the panini press, so make it in a big skillet. Reduce amounts if it's only two of you. Try this recipe to celebrate National Grilled Cheese Day.. or save it for brunch this weekend.

Directions
Combine orange marmalade and mascarpone.
Butter one side of each slice of bread. Place 4 slices, buttered side down on work surface. Spread mascarpone mixture on bread. Place brie slices over mixture and sprinkle with chocolate chunks.
Top with remaining slices of bread, buttered side up.
Heat large skillet over medium heat for 2 minutes. Put sandwiches in pan, cover and cook for 2-3 minutes until golden brown. Watch carefully.
Turn sandwiches, pressing each firmly with spatula or heavy pot lid (smaller than the skillet).
Cover and cook for 2-3 minutes until undersides are browned.
Remove cover, turn sandwiches over and press firmly with spatula or pot lid again.
Cook until cheese has melted completely.
Remove from pan and let cool 2-3 minutes.
Posted by Janet Rudolph at 10:47 AM

Recently, I've been more willing to try sandwich combos with chocolate. This sounds pretty tasty to me!

This grilled cheese could be an entree
or nicely sliced to become a dessert.

And to dress it up as an entree, I would serve it with a chardonnay or as a dessert with a glass of milk.