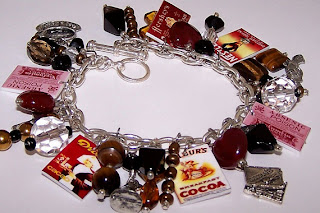 My worlds collide again. Pattie Tierney is a food blogger and mystery reader. She's been a guest here on DyingforChocolate.com with some killer chocolate recipes. Recently I posted the following on MysteryFanfare.com, my crime fiction blog, but I knew people who read this chocolate blog would also be interested in Pattie and this bracelet, in particular, so I'm reposting here.

Pattie Tierney has a passion for travel, dining, photography, and mysteries, and writes about them all. She has published in the St. Louis Post-Dispatch, Personal Journaling Magazine, The Diarist's Journal, and Ink & Ruminations. Her art has appeared in The Rubber Stamper, Signatures: The Art Journal Collection, ATCs: An Anthology of Artist Trading Cards, Somerset Studio and Stamper's Sampler magazines.

Her Agatha Christie Mystery Charm Bracelet was featured in the holiday gift guide of BUST magazine's December 2006 issue as one of the "must have" gifts for the year. In 2007 her "Methods of Murder" charm bracelet and Agatha Christie Typewriter Pin were both included in the Mystery Gift Guide of Mystery Scene Magazine. Pregnancy Magazine featured her Jane Austen bracelet in their 2008 Valentine issue. Her Clue Game Piece Bracelet was featured on the online site iVillage.com in November 2009 as one of 7 Cool Products Made from Board Games. Tierney has designed jewelry for various organizations including USA Today, Sisters in Crime, Short Mystery Fiction Society, Forensic U and the St. Charles Public Library system.

The former editor of The Baker Street Chronicle, a Sherlock Holmes journal, her current project, Recipes To Die For, is a mystery cookbook full of recipes from actors, authors, and readers who perform in, write, or read mystery stories.

I once read an article on Marilyn Monroe that quoted her as saying that she wore no jewelry because she didn't want to wear anything that might detract from her beauty. Of course, Marilyn Monroe was 36 when she died. Had she lived, she'd been two months away from celebrating her 86th birthday. My guess is that, unless she chose to nip, tuck, Botox, and lipo, she'd have bagged, sagged, and dragged with the rest of us. And, like the rest of us, she'd have adorned her body with some pretty dynamic baubles to divert attention from the, um, baggage, saggage, and draggage.

Unlike Marilyn, I've always been a jewelry wearer, but as I got older I wanted jewelry that represented the "me" that I know I am rather than a reflection of someone else. Herein lay the problem: I am a mystery fan. And, as I found out after many hours of tireless search, no one makes mystery jewelry.

Armed with no more than an idea, desire, and a bit of chutzpah, I bought a book on jewelry making, a package of assorted jewelry-making tools, a collection of beads and findings, charm bracelet chain, and a handful of charms, some culled from broken bits of jewelry that had been taking up space in my jewelry box. I had absolutely no idea what I was doing, but had an image in my mind as to what I'd hoped would be the end result.

The task was slightly more daunting than I'd imagined, but I love a challenge and in little less than a month I had created my first piece of mystery jewelry, a "Murder and Mayhem" bracelet devoted to Agatha Christie. It sold the day it listed. It was a good feeling to know that I was not alone. That, out there, somewhere, was at least one other formerly frustrated mystery fan looking for jewelry. The benefit of a mystery focus is that inspiration can be found everywhere. From Dame Agatha to Sherlock Holmes, Nancy Drew to Trixie Belden, Nero Wolfe to Charlie Chan, I was making bracelets as fast as you can say, "It was a dark and stormy night." Then, I thought, why not make a "Dark and Stormy" bracelet? How about a city bracelet like "Sherlock's London?" Characters, authors, even "Methods of Murder" have all found their way to becoming bracelets.

My latest creation, inspired by none other than Janet Rudolph and recently released is called (what else?), "Dying for Chocolate" and features murder weapons, poison labels, antique chocolate labels and beads in colors of milk and dark chocolate. Dastardly and delicious!

What a tasty looking bracelet! Ha!