Today is Queen’s Day, sponsored by the Dutch Community. It is being celebrated at the Windmill in the Queen Wilhelmina Garden in Golden Gate Park, San Francisco, 11am-5pm.

So planning for the celebration today, I realized I have never mentioned anything about Dutch Cocoa here on DyingforChocolate.com. How often have you seen a recipe that called for Dutch cocoa and wondered exactly what that means.

Actually, there's nothing very Dutch about Dutch Processed Cocoa. It's called a Dutching process because the person who invented it, Coenraad J. van Houten, was a 19th century Dutchman who pioneered the use of the hydraulic press to defat chocolate liquor. Van Houten's solution lay in simple chemistry. Cocoa in its natural state is slightly acidic, as indicated by its pH value of around 5.4. By soaking the cocoa nibs in a basic (or alkaline) solution, he found he could raise the pH to 7 (neutral) or even higher. The higher the pH, the darker the color. And, the acids present in natural cocoa were neutralized, reducing its harshness.

These developments greatly expanded the use of chocolate, which had been mostly used as a beverage in Europe up until that point. Because Dutch process cocoa has a neutral pH, and is not acidic like regular cocoa, it cannot be used in recipes that use baking soda as the leavening agent and that rely solely on the acidity of the cocoa to activate it; it can instead be used in recipes that use baking powder for leavening. 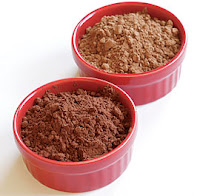 Planning to bake with cocoa? Here's advice from David Lebowitz.

Here are a few cocoas I like that are great in brownies, devil's food cake and other chocolate treats: King Arthur Flour  Double-Dutch Dark Cocoa,  Callebaut, Guittard, Valrhona and Ghirardelli.

The following recipe is adapted from Alice Medrich for Cocoa Brownies. Cocoa brownies have soft centers and crunchy 'crusts'. I love these, and as I've said before, you can never have too many brownie recipes. Use the very best cocoa!

Directions
Position rack in lower third of the oven and preheat to 325°F.
Line bottom and sides of 8 x x8 baking pan with parchment paper or foil, leaving overhang on two opposite sides.
Combine butter, sugar, cocoa, and salt in medium heatproof bowl and set  bowl in wide skillet of barely simmering water. Stir from time to time until butter is melted and mixture is smooth.
Remove bowl from skillet and set aside briefly until mixture is warm, not hot.
Stir in vanilla with wooden spoon.
Add eggs one at a time, stirring vigorously after each one.
When batter looks thick, shiny, and well blended, add flour and stir until you cannot see it any longer, then beat vigorously for 40 strokes with wooden spoon or rubber spatula.
Spread evenly in lined pan.
Bake until toothpick comes out slightly moist-20 to 25 minutes.
Cool completely on a rack.
Lift up ends of the parchment or foil liner, and transfer brownies to a cutting board.
Cut into squares.
Posted by Janet Rudolph at 10:45 AM

Uh, what is the ending of the sentence, "Stir from time to time until butter is melted and mixture..."?

Thanks for the very intresting information about cocoa..

Kate, sorry about that.. until mixture is smooth.. :-) Just accidentally cut off the text.