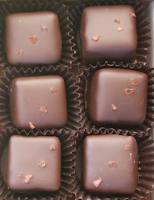 April 15: Tax Day. "The only things certain in life are Death and Taxes." This quotation is usually attributed to Benjamin Franklin, who wrote in a 1789 letter that “Our new Constitution is now established, and has an appearance that promises permanency; but in this world nothing can be said to be certain, except death and taxes.” However, The Yale Book of Quotations quotes “‘Tis impossible to be sure of any thing but Death and Taxes,” from Christopher Bullock, The Cobler of Preston (1716). The YBQ also quotes “Death and Taxes, they are certain,” from Edward Ward, The Dancing Devils (1724). No matter who said it, it's true. And, just in time for Tax Day 2012, Socola Chocolate has created a truffle to mark the day: THE INEVITABLE EDIBLE Truffle. Perfect for Tax Day.  It's a dark chocolate truffle made with Santa Rosa's Moonlight Brewing Company's Death & Taxes stout.

After meeting with Moonlight brewer Brian Hunt at the Fancy Food Show in January, the Lieu sisters developed a truffle that features the regional favorite Death and Taxes. The Inevitable Edible has a smooth center robed with dark chocolate. The  beer flavor in Death and Taxes is subtle. I tasted this Incredible Edible at the San Francisco International Chocolate Salon. Excellent. If you need a stronger beer flavor to get you through tax day, try their Guinness Truffle. 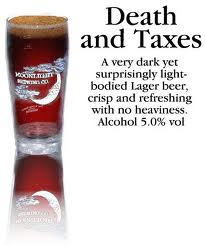 A little history of the Lieu sisters from their website:
Wendy, the older of the two sisters and is Sôcôla’s chief Chocolatier. A pastry school graduate, Wendy began experimenting with Klutz's Cookbook for Kids at age nine and with truffles recipes at age nineteen. She holds a degree in managerial economics from UC Davis and works as a consultant in San Francisco, but chocolate is where the heart is: mostly self-taught, she finds that her thoughts wander frequently now to new truffle recipes, and she’s even begun dreaming up ganache concoctions in her sleep.

By contrast, Susan couldn’t tell the difference between teaspoons and tablespoons as a child, and her early attempts at friendship bread (referred to as the Great Salt Incident of ’95) tasted like the Dead Sea. Her talents lie outside the kitchen, as a fundraiser, activist, and saleswoman. A Harvard graduate with a degree in Social Studies, Susan feels most at home when she’s stirring up fervor in people—whether for sustainable farming methods in Vietnam, international relief for refugees in Africa, or for her and Wendy’s chocolates.

When Wendy began experimenting with chocolate recipes in 2001, she never intended for the truffles to be anything other than Christmas gifts, but her friends and family members kept asking where they could find more of them. One neighbor suggested that she try marketing and selling the chocolates, which inspired Susan to begin promoting. Weeks later, Wendy and Susan (then nineteen and sixteen years old) were featured on KSRO 1350's Pat Thurston Show. They chatted excitedly about their chocolates, took in callers, and raffled truffles, and audiences throughout Sonoma County fell in love—with the girls no less than with the truffles.

Sôcôla Chocolates can be found  Bi-Rite Market, some Whole Foods Markets, Chocolate Covered, online at their website, and at many specialty chocolate shops.
Posted by Janet Rudolph at 7:43 AM

Great name for a truffle! I would love to try some though.

Where can I go to try Death and Taxes Dark LAger?