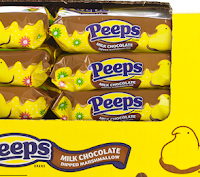 Of all my childhood Spring Confection memories, PEEPS stand out. My sister and I still buy each other PEEPS around Easter, even though neither of us actually eat the sugary marshmallow-y creatures any more--or at least I don't. She buys me purple rabbits; I buy her classic yellow chicks --the original PEEPS. You see where this is going? I'm a purist.

Last year I mentioned the opening of the Oxon Hill (MD) PEEPS Store (near D.C.) PEEPS are their own industry, and the Washington Post, Smithsonian Magazine and many local papers have PEEPS diorama contests. Certainly a good use for this national favorite. 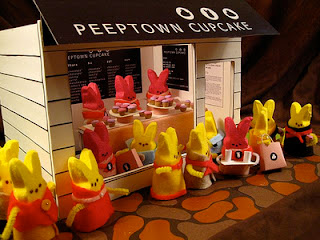 And then there's the ultimate in the ever improving PEEPS: Chocolate-Covered PEEPS, available from the original company in both Dark and Milk chocolate. These are not the small peeps packed together in rows. No, these Chocolate Peeps come in individually wrapped packages. Sadly, the cool sparkly coating of sugar is missing, and I think it would have been a nice buffer between the chocolate and marshmallow to make it stand out from the rest of the chocolate marshmallow candy.

Anyway, the large singular chocolate covered PEEPS has a yellow-colored marshmallow center. Chris Schneewiss, brand manager for PEEPS at Just Born, said, "These PEEPS® will please loyal fans and entice newcomers, perhaps becoming our biggest hit ever." I beg to differ. With so many wonderful chocolate marshmallow treats out there from various chocolatiers who make their own marshmallows, why would I want this new PEEP that's not a PEEP. 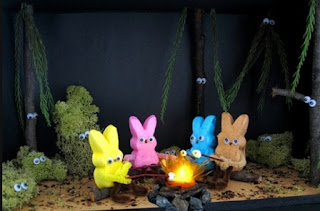 So, let me tell you what I think. First the chick is not sitting, as in chicks all in a row. Well, he's by himself, and he's on his side, kind of, and well-articulated. It's the elastic quality of the "old" peeps that's all the fun for me--pulling them apart. 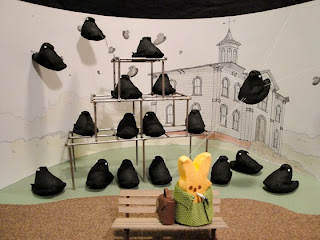 O.K. should I be holding PEEPS up to a higher standard? Maybe not. After all, it's all about childhood memories. Maybe I personally don't want Chocolate Covered PEEPS when I can create new memories with quality chocolate and marshmallow combinations. But, if I were a kid again, I bet I'd love them! So I'm not dismissing them altogether. The price can't be beat, and they're available at your local drugstore or supermarket.

And, just as an aside, Jacques Torres makes fabulous chocolate, and they sell Chocolate-Covered PEEPS. Their name: Chirp'N'Dales. They are adorable. Also, Asher's Chocolates makes Milk Chocolate Covered PEEPS.

1. Make PEEPS S'Mores, especially with the chocolate covered ones
2. Plop a Chocolate Covered PEEPS down in your Hot Chocolate or Coffee
3. Decorate cakes or cupcakes with PEEPS
4. Create Your Own Diorama

Want to make your own Chocolate Covered PEEPS using the original PEEPS? Here's how:

1. Melt good dark chocolate or milk chocolate (about 8-16 ounces, depending on how many you plan to make
2. Remove PEEPS from package. I would use Chicks since they're the original, but the other shapes (rabbits, etc) work well.
3. Grasp the individual Chick PEEP gently by the head and dip--or use a two fork process or a special dipping tool.
4. Two choices: Either cover the entire Peep or just dip one end as you would strawberries. Be sure and let any excess drip off.
5. Place on wax paper covered cookie sheet. Continue process.
6. As a colorful bonus, roll in sprinkles (as you would truffles), starting with the coolest one.
7. Pop into refrigerator for 20 minutes to harden.
Posted by Janet Rudolph at 4:37 PM

Happy Easter to you and your favorite peep!

What a fabulous post, Janet. That's so funny about the difference in taste between you and your sister. Like you say though, it is all about the memories:)

I never cared for peeps. I don't think I would like them coated in chocolate either but, hey, you just never know!

I've been meaning to ask you about your Pinterest status, on or off?

Louise,
PEEPS really don't taste very good, even with chocolate. So many fabulous homemade marshmallows out there.

Still haven't figured out Pinterest. I know Marion has, so I'll have to give it a go as soon as I find time. :-)

Peeps are a wonderful Easter treat and a classic favorite. All of us Asher's Chocolates enjoy them as well. You're right about losing the aparkly sugar coating, so we only dipp the lower half of our Peeps in chocolate, leaving their cute chick headds exposed. Looks like they're swimming in a lake of chocolate. Yum!