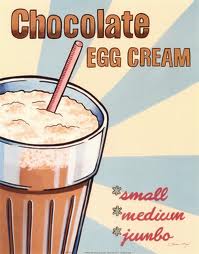 Thanks to Whatscookingamerica.com for the history of the Egg Cream. Despite its name, the egg cream contains neither eggs nor cream. In the beginning, it was a soda produced almost exclusively in New York (particularly Brooklyn). The basic ingredients are milk, seltzer, and chocolate syrup. It is traditionally made in a small Coke-style glass.

True New Yorkers insist that it is not a classic egg cream without Fox's U-Bet Chocolate Syrup. It is perfectly proper to gulp down an egg cream. In fact, egg cream will lose its head and become flat if it is not enjoyed immediately.

For many years, the egg cream remained a product sold only through New York soda fountains because bottled versions were hard to replicte. The cream, chocolate, and soda had a tendency to separate and to go bad after a couple days at best, and efforts to pasteurize or preserve the product ruined the taste. Today, Egg Cream drinks are bottled by a few small companies.

In the early 1900s, Fox's U-Bet Chocolate Syrup was created. According to The Brooklyn Cookbook by Lyn Stallworth and Rod Kennedy Jr., "You absolutely cannot make an egg cream without Fox's U-Bet." The cookbook quotes Fox's grandson, David, for the story of the syrup's name:

"The name 'U-Bet' dates from the late-'20s, when Fox's grandfather got wildcatting fever and headed to Texas to drill for oil. 'You bet' was a friendly term the oilmen used. His oil venture a failure, he returned to the old firm, changing Fox's Chocolate Syrup to Fox's U-Bet. He said, 'I came back broke but with a good name for the syrup.'

Pour 1/2 inch of cold milk into a tall soda glass. Add seltzer or club soda to within 1 inch of the top of the glass; stir vigorously with a long spoon (this will cause it to become white and bubbly with a good head of foam).
Very gently pour 2 tablespoons of chocolate syrup slowly down the inside of the glass; briskly stir with a long spoon only at the bottom of the glass where the chocolate sits. The resulting drink should have a dark brown bottom and a 1-inch high pure white foam top (if you mix it too much, the foam disappears).

NOTE: Do not let Egg Cream sit for a long period of time-5 minutes or more; it will go flat. 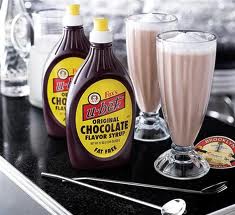 Take a tall, chilled, straight-sided, 8oz. glass
Spoon 1 inch of U-bet Chocolate syrup into glass
Add 1 inch whole milk
Tilt the glass and spray seltzer (from a pressurized cylinder only) off a spoon, to make a big chocolate head
Stir, Drink, Enjoy
Posted by Janet Rudolph at 10:05 AM